Contador says he won’t follow Armstrong if he attacks 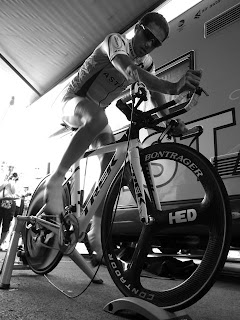 Alberto Contador said Monday if the tables are turned in the Alps, he would not chase down an attacking Lance Armstrong in a solo move in the mountains.

The Spanish climber suggested he would adhere to the cycling code that says never chase down an attacking teammate on a summit finish, opening the door for the next round in the struggle for team leadership at the Astana squad.

“If we arrive to a mountain stage and Lance attacks, I will not follow him,” Contador said when asked at a rest-day press conference. “There are other riders who have to chase him down.”

Contador said he would return the favor to Armstrong, who stayed back with the other GC rivals on the summit finish at Arcalis in the Tour’s first of three summit finishes on Friday.

Contador attacked with just over two kilometers away, taking 21 seconds on Armstrong and Co. and climbing into second overall and knocking Armstrong into third.

He once again defended his decision to attack in Friday’s stage and downplayed suggestions that he broke team orders as suggested by Armstrong.

“In the morning, we had a team meeting and spoke about controlling the stage and to wait for the attacks. The attacks never came and I thought I could take benefit of the stage,” he said. “It’s one thing that’s said on the bus and something else once in the heat of the battle. I attacked and no one came with me. I knew I had to go as hard as I could to gain as much time as possible. The entire (Astana) team benefitted.”

The battle of minds between Armstrong and Contador will ratchet up as the Tour de France passes a series of transition stages this week heading toward a GC battle for the yellow jersey in the Alps.

More than 200 journalists and TV crews packed into a Novotel north of Limoges. There were so many journalists, the press conference was held under a tree near the swimming pool.

Team manager Johan Bruyneel was attending a team manager’s meeting and did not join. Armstrong spoke extensively to reporters after Sunday’s and did not hold a press conference.

All the attention was on Contador, who was cool as a cucumber as he played down suggestions that the Astana team is rife with tension, even though Armstrong admitted as much publicly in a television interview after Sunday’s ninth stage.

“There’s been a lot of polemic about my attack on Arcalis. I am calm. There’s no tension. I am concentrated on the race. I don’t worry about anything else. All this talk about team leadership is becoming a little tiring,” he said. “The situation on the team is normal. We all sit at the same dinner table to eat. Sometimes the talk of tension on the team is played up in the outside world more than is really true.”

Contador said the Tour is still wide open and said the yellow jersey might not be decided until the final climb up Mont Ventoux. He cited riders such as the Schleck brothers, Cadel Evans and Carlos Sastre as his most dangerous rivals.

He also downplayed suggestions that the Astana team is torn by divided loyalties between Armstrong and Conrador, saying that the riders are “very professional” and will ride to protect the team leader.

“The Alps will clarify everything,” he said. “Perhaps there’s been better ambiance at other races (within the team), but everyone is here to win the Tour.”
Posted by Recovox at 10:33 AM