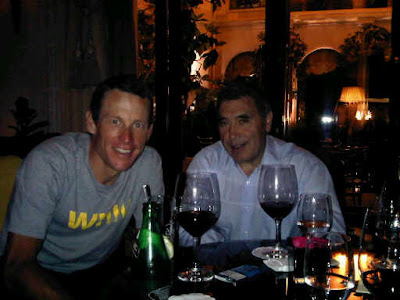 Lance Armstrong admitted on Sunday that he did not join his teammates in celebrating Alberto Contador's Tour de France triumph on Saturday night, preferring instead to go for drinks with the backers of his future outfit, Team RadioShack.

"To be honest, I went out for dinner with the RadioShack guys and I had a few extra glasses of wine than I would have normally done," said Armstrong.

The 37-year-old Armstrong finished third overall after Sunday's 21st and final stage, nearly five and a half minutes behind Contador, who took the yellow jersey on stage 15 to Verbiers and kept it all the way to Paris.

Armstrong had been in contention to wear the yellow jersey early on, having been in the general classification's top five since the third stage, but was made to work for his third place in the final days after late challenges from Garmin's Bradley Wiggins and Saxo Bank's Fränk Schleck.

Contador and runner-up Andy Schleck proved strongest in the mountains, and Armstrong said he had no complaints.

"I came here to do my best and I came across some guys who were clearly better than me," he said. "I don't have any regrets. I got put out a couple of times, but considering my age and recent racing, it's not a bad performance overall."

Next year he hopes to return to the Tour with his new team. But for now, Armstrong said, he’s ready for a break.

"I am ready to go home. It's been a long three weeks as usual," he said. "It's stressful and there are a lot of commitments outside of riding the bike race.