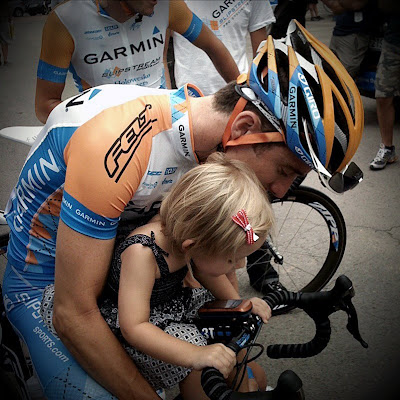 Thus far, suspicions that the first week of the 2009 Tour de France would be relatively calm have proven to be true, at least for the yellow jersey contenders. After individual and team time trials in the first four days of the race, a few flat and windy stages, and three mountain stages that were not conducive to aggressive tactics from the yellow jersey contenders, the only pre-race favorite to be out of contention is Rabobank’s Denis Menchov.

That’s not say the first nine stages were easy, because the Tour de France is never easy, but the nature of this year’s race meant that riders hoping to win the yellow jersey needed to arrive in Monaco in a condition that would allow them to be at their best in Week 3.

There is a limit to the amount of time any rider can compete at his absolute best, and one of the keys to winning the Tour de France is timing your peak fitness to coincide with the hardest days of the race. In previous years, when the first mountain stages at the end of the first week were likely to be more decisive, it was important for riders to start the Tour de France with optimal fitness so they could ride at full strength on the first big mountain stages they encountered. The tricky part there was timing peak fitness so that the riders were still strong 7-10 days later for decisive mountain stage and time trials in the final week.

This year, several riders have revealed in interviews that they came into the Tour with the intention – or hope – of riding into optimal fitness as the race progressed.

Essentially this means they’re using the physical challenges of the first week to supply training stress they hope to benefit from in the final week. The route of the 2009 Tour de France is conducive to this type of plan because after nine stages the yellow jersey contenders have a rest day today and three relatively flat stages before facing the next mountain stage on Friday (Stage 13 to Colmar). At this level of the sport, four days of more moderate-intensity racing is plenty of time to recuperate and adapt to the stress of the first nine days of the race.

For the riders and team directors, the nature of the route makes it difficult to predict which riders are going to be most dangerous in a week’s time. Riders who appear good but not great right now may turn out to be incredibly strong in the Alps, and riders who seem to have great form now may start struggling in the final week (although that’s really true in all years). In years when the physical challenges of the Tour were more evenly spread out over the course of the three weeks, it was easier to tell who was strongest pretty early on.

In my opinion, the route of 2009 Tour de France is very good for Lance Armstrong. With the relatively short period between his decision to return to professional cycling and the start of the Tour de France in Monaco, it would have been difficult for him to be in the condition necessary to be a yellow jersey contender if the race’s hardest and most decisive climbing stages were in the first week. Of all the top riders in this year’s race, it’s Lance who may benefit the most from the concentration of hard stages in the final week.

Historically, Lance has a proven track record of getting stronger in the final week of a three-week race. That was true throughout the Tours he won, and it was true during the Tour of Italy in May. But although he experienced a big boost in his fitness and power output from competing in the Tour of Italy, it would have been difficult for him to both maximize his training and recover well enough to be fresh for the start of the Tour de France in the short time span between the two events.

From the conversations I’ve been having with Lance and what I’ve observed over the past nine days of racing, I’m confident that Lance will continue to get stronger as the race progresses. He’s recovering well between stages, and in the Pyrenees he felt strong but not super. Where that would worry some people, I find it encouraging because it means there’s room for him to get stronger. Lance knows what it feels like to be at his best, and if he were there already it would mean that the stress of the first week was not likely to lead to further adaptations.

Of course, there’s no guarantee that I’m correct. No one has ever come out of a three-year retirement and ridden the Tour de France less than 12 months later. And Lance has never used one Grand Tour to prepare for a second one in the same season. The best we could do was to look at the data we’ve collected over the past 20 years (some of which can be seen here in a special Lance Training Retrospective) to determine the workloads and time frames necessary for him to achieve Tour de France fitness. On top of that, examining the route of the 2009 Tour de France and realizing it was possible to use it to Lance’s advantage, was a crucial part of designing his training and racing schedule. Breaking his collarbone in the Castilla y’Leon race certainly disrupted the plan, but fortunately his fitness was very good at the time and he was able to return to full-strength workouts soon enough to keep his momentum moving forward.

The 2009 Tour de France will be one of the most unpredictable races in recent memory, not only because no one – not even me – knows exactly how Lance is going to adapt during the race, but because the unusual structure of this year’s route makes it difficult to predict how the fitness of the other yellow jersey contenders will change over the next two weeks. Stay tuned and watch closely, because it’s going to be nail-biting race all the way to the summit of Mont Ventoux.
Posted by Recovox at 1:16 PM