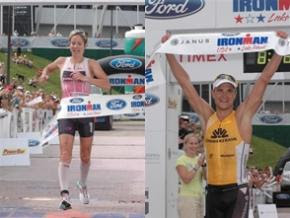 With only four opportunities remaining to qualify for the Ironman World Championships, Ironman Lake Placid welcomed an International field aching to vie for an opportunity to compete in Kona. While both the men’s and women’s field featured deep talent, Twelsiek and Macel made strong statements on the bike and were uncatchable on the run to earn victories, and slots to Kona.

While it was Macel who beat everyone out of the water, American Matt Lieto was the first man to reach T1 at 51:50. He was followed closely by fellow American Paul Fritzsche and Twelsiek. Twelsiek won the race out of transition and found himself first on the wet roads. From there, Twelsiek made an early statement that he would be looking to win the race. The German never faltered on the bike and continually grew the gap between him and the second place cyclist, Lieto. Lieto also worked hard in the second leg of the race, creating his own gap with the chase pack. Once on the run, Twelsiek’s lead only grew as Lieto faded. The strongest runners in the group, Germany’s Christian Brader and Australia’s Jason Shortis, could not do more than keep pace with Twelsiek, giving the German a win in 8:36:37. Once past Lieto, Brader held position and finished second at 8:56:35. While Shortis looked to be completely out of the race on the bike, coming into T2 in tenth position, he turned in the strongest marathon of the field to earn third at 8:58:09.

In the women’s race, Macel made an early statement by easily beating all of the men and the women, including collegiate All-American swimmer Hillary Biscay, out of the water at 50:48. Biscay was second, followed by last year’s Lake Placid winner Caitlin Snow of the United States and Canadian Samantha McGlone. Macel quickly rode away from her quickest chasers. Canadian Tara Norton looked to be the most capable of catching Macel, but the gap was too large and she came into T2 in second position nearly 22 minutes behind Macel. In the meantime, Snow struggled on the bike and had fallen off the leader board, riding her way into T2 in seventh position. Macel enjoyed a comfortable lead throughout the entire marathon, posting an overall time of 9:29:36 for the victory. Snow posted a marathon time of 2:57:04, by far the best of the women’s field, to run her way to second at 9:41:21. McGlone posted the second fastest marathon, holding position and earning third in a time of 9:44:24.