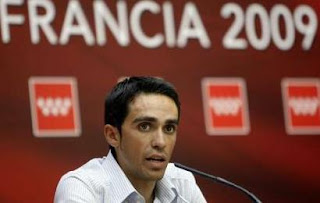 Tour de France winner Alberto Contador spoke out against teammate Lance Armstrong, the Tour's third place finisher, in a Madrid press conference on Monday. "My relationship with Lance Armstrong is zero," the 26-year-old Spaniard said, according to AFP. "He is a great rider and has completed a great race but it is another thing on a personal level, where I have never had great admiration for him and I never will."

The 2009 Tour winner described the tension behind the scenes within the Astana team. "On this Tour, the days in the hotel were harder than those on the road. The situation was tense and delicate because the relationship between myself and Lance extended to the rest of the staff. The two riders who had the most weight on the team did not have an easy relationship and that puts the rest of the technical staff and the riders in an uncomfortable position."

While Armstrong acknowledged Contador's undeniable sporting abilities, stating "Alberto was far superior to anyone else in the race this year," his actions on Saturday evening belied a lack of respect for his teammate's impending Tour de France victory. While the Astana team had a party to celebrate the victory Contador would confirm in Paris less than 24 hours away, Armstrong chose to have dinner with people from RadioShack, the title sponsor of Armstrong's new American team for 2010.

In addition to the internal strife endured by Contador throughout the three-week Tour de France, Contador was the victim of a public gaffe during the podium ceremony in Paris on Sunday in which the Danish national anthem was played instead of Spain's. Contador called the incident a "huge blunder" but added that the race organisers had "rectified matters, albeit belatedly."

While Lance Armstrong and Johan Bruyneel have declared their intentions to leave Astana in 2010 for the new American team sponsored by RadioShack, Contador has not publicly revealed his choice of teams for 2010. Contador has one more year in his contract with Astana, but he may seek exit from it in order to join another team. "We'll have to see what happens," said Contador. "I don't know where I will go, but it will clearly be with a team that is 100 percent behind me."
Posted by Recovox at 1:53 PM

Definitely sounds like a spoiled sport to me. Just yesterday Lance was very complimentary about him. If lance had wanted to he would have kicked Contador's butt, but since he wasn't the number one rider on the team he did his part to be sure the number one rider won the race.