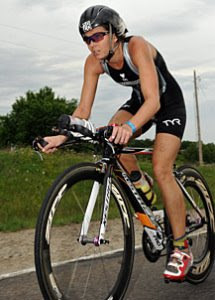 On a warmer than normal day in Sonoma County the professional athletes hit the 75 degree water in the Russian River to start the 2009 Vineman Ironman 70.3. With clear skies and none of the trademark marine layer the race had an ominous start to a day most wouldn’t think could yield a course record.

Clayton Fettell. John Dahlz, and Simon Thompson led the men out of the water and immediately began to string the race out. A long line in pursuit included Craig Alexander (already suffering G.I. troubles), Brian Lavelle, Leon Griffin, Reinaldo Colucci, Luke McKenzie and Joe Gambles. In traditional fashion Joanna Zeiger found herself in the middle of that men’s pack leading the women’s race.

By the time then men hit the halfway mark at the top of Canyon Rd. on the bike, Joe Gambles was already stamping his authority on the race. At that point he led Colucci by 1 minute and a group that included Alexander, Thompson, Fettell, Dahlz, and Lavelle another minute back. When Joe Gambles hit T2 most couldn’t believe he had ridden 5:50 in to the field. Though Craig Alexander was in the chase group, that big of a lead lead seemed like a big gap to bridge, even the Ford Ironman World Champion!

As the men hit the half-way point of the run, and a lead still sitting at five minutes, the message was clear, Joe Gambles was going to win this race! The only thing left to do for everyone else was fight for second place.

Gambles, racing virtually alone, set a new course record and captured the biggest win of his career at this classic race. As Gambles gave his thanks to the crowd, the next two athletes across the line were Aussies Simon Thompson and Leon Griffin. Following close behind them were Northern California pros John Dahlz and Brian Lavelle to round out the top five.

On the women’s side, as Joanna Zeiger started the bike ride Aussie Pip Taylor followed the Ironman 70.3 World Champion 30 seconds later. Similarly to the men, but even more pronounced, the women’s race was also strung out from the time they hit T1 and mounted their bikes to start the 56 mile bike ride.

The race started to take shape when the women hit the half way point of the bike as Taylor and Zeiger joined forces to gap Kelly Couch and Dede Griesbauer by two minutes.

When their race hit T2 it seemed obvious, this was going to be Taylor’s race to win or lose as she put almost four minutes into Zeiger, Griesbauer and Couch by the time they traded their bikes for running shoes. Another two minutes back and riding time in to the field, were the two young Ironman stars Tyler Stewart and Linsey Corbin.
On the run and hitting the 7 mile mark Taylor was still in the clear with Zeiger, Griesbauer, Couch, and Stewart within 1:20 of each other and Corbin lurking another minute back.

As the dust finally settled in the finish chute, Pip Taylor had earned one of the best wins of her career over a quality field full of Ironman and Ironman 70.3 Champions. Meanwhile the top five sorted itself out with Tyler Stewart running her way up to second followed by Griesbauer in third, Corbin in fourth and then Kelly Couch in fifth.