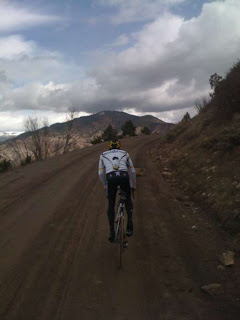 In 1995, road cycling’s World Championships were held in Bogota, Colombia. This caused some consternation within the professional cycling world because the race courses were located approximately 2600 meters (8,500 feet) above sea level. That’s just a little bit lower than the altitude of Aspen, Colorado. More important for the European riders was the fact that the entire World Championship road race was to be held at altitudes they only saw at the very summits of mountain passes in the Alps and Pyrenees.

Though Lance Armstrong had participated in the Tour de France three times by August of 1995, and won two stages (1993 and 1995), he was still largely considered to be at his best in one-day races and not long stage races. Since he was also a former World Champion, having won in Norway in 1993, the 1995 World Championship Road Race title was a big priority for him.

Chris Carmichael, who was the National Coaching Director for USA Cycling and lived at 7,500 feet above sea level at the top of a canyon outside of Colorado Springs, CO, knew there were unique challenges involved in competing at high altitude. He, along with sports scientists from the US Olympic Committee, designed a specific altitude training protocol for Lance Armstrong, one that exposed Lance to the hypoxic conditions found at high elevations so his body would adapt and give him the ability to perform at his best in Bogota.

The Basics of Altitude Training
As you climb higher from sea level, air pressure decreases. The percentage of oxygen in the air is the same at all elevations (21%), but at higher altitudes there is less pressure to keep the oxygen molecules close together. This is important because oxygen moves from your lungs into your bloodstream by following a pressure gradient. At sea level, the partial pressure of oxygen in the air you breathe in is higher than the partial pressure of oxygen in your blood, so oxygen follows the pressure gradient and is pushed from the area of high pressure (lungs) to the area of low pressure (blood). As you go up in elevation and the air pressure decreases, the pressure gradient pushing oxygen into your blood is not as strong. This doesn’t really start to cause a problem until you reach about 5,000 feet (Denver, Colorado is located at 5280 feet above sea level). Once you start going above 5,000 feet, the pressure gradient starts weakening to the point that blood is leaving the lungs (to go to the heart and then out to the rest of the body) without being fully saturated with oxygen. This reduces the amount of oxygen available to working muscles and leads to diminished performance. In fact, starting at 1,500 meters (4900 feet) there can be an associated loss of 3% of Vo2max for every additional 300 meters (approx. 1000 feet) you climb.

Exposure to altitude affects every athlete differently, however some common complications with altitude include dehydration, loss of heat and humidity acclimation, increased basal metabolic rate of about 100-200 kcal per day, as well as an accompanied decrease in appetite. These changes to metabolic rate and appetite are important to note because being able to sustain training volume and intensity requires proper nutrient replenishment.

Fortunately, the human body can acclimate to high altitude environments, and the subsequent adaptations lead to improved athletic performance at high elevations and at sea level. The body’s initial response to altitude is to increase breathing rate and heart rate at both rest and during submaximal exercise. In addition, blood is concentrated by reducing the fluid, or plasma, component. Collectively, these changes improve oxygen uptake by the lungs and its delivery to tissues. The disadvantages of these changes are that perceived exertion at any workload is increased and circulating blood volume is reduced.

Why We Train at Altitude
Altitude training can be an effective way of improving your cycling performance, at any elevation. Both acclimatization to altitude and training at altitude have been shown to stimulate the following adaptations:

Taken together, these adaptations improve cycling endurance, sustainable power, and speed. By increasing the amount of oxygen your muscles can get and utilize, altitude training increases the amount of work you can perform before you reach your maximum sustainable power, as well as the work you can sustain when you get there. When you’re climbing a mountain with the pack, these adaptations make it easier to stay with the lead group’s pace, or give you the ability to push their pace and put them under pressure. This is true whether the climb begins at 25 meters or 2500 meters above sea level.

After a period of exposure and training at altitude, responders (not all athletes experience positive adaptations from exposure to moderate altitudes of 6,000-9,000 feet) can expect a 2-4% power increase in performance at sea level. Training at altitude is a legal way to increase the amount of oxygen your body can deliver to working muscles. But living in the high mountains full-time is not always the way to get the biggest bang for your buck from altitude training, and recommendations for training at altitude require moderation and monitoring.

By 1995, the science of altitude training had been pretty well documented. The biggest questions were around how much altitude exposure was right for Lance Armstrong, and how far out from his goal competition. Based on the results from previous training programs, Chris decided that ideally, Lance would live at 2000-3000 meters (6500-9800 feet) for 4-5 weeks and then return to sea level 14-21 days before competition. This amount of exposure to altitude seems to be long enough to maximize the physiological benefits of being at altitude and allows Lance (or any other athlete on a similar schedule) to return to lower elevations where they can take full advantage of their increased ability to deliver oxygen to working muscles. In other words, when you return to sea level, you can achieve higher power outputs on the bike, and in turn those high-power efforts can drive your fitness to new heights. This type of plan used frequently by endurance athletes and is often referred to as the “Live High, Train Low” method of altitude training. The benefits of training at altitude can last up to three months (roughly the life of the red blood cells produced as a result of the altitude exposure), but the biggest benefits are typically observed 2-4 weeks after return to sea level.

While training at altitude, it is important that athletes decrease their training volume by 10-20% and their training intensity by 5-7%. There should also be an increase in recovery time between training sessions when at altitude. Failure to make these adjustments can lead to tremendous fatigue because it’s more difficult for your body to recover from training at high elevations. Athletes should also be attuned to the warning signs of altitude sickness, which include loss of appetite, sleeplessness, nausea and headaches. As you can see from the diagram in Table 2, Lance spent the first week of his 5-week altitude training camp completing low-intensity aerobic rides. This was followed by 2-3 weeks of mostly aerobic rides with some lactate threshold intervals. By the time he got to the race-specific, maximum-intensity interval work, he was 3-4 weeks into the altitude training camp, was fully acclimated, and was starting to see the physiological adaptations that come from time at high elevations.

While Lance had a well-designed training plan, the 1995 World Championships was shifted from September to October. This was 6 weeks later than it had been in the past. This shift made for a very long season for Lance. He had focused intensely on the Classics in Northern Europe during the spring and raced the Tour de France in July. World Championships in September seemed doable, but remaining in top condition into October was too much. “He wasn’t recovering from the training,” remembers Chris Carmichael. “He was young, only 24 years old, and trying to extend his season into October wasn’t realistic.” As a result, Lance did not compete in the 1995 World Championship, but the altitude training plan featured here wasn’t wasted. Having already developed a plan that achieved results for Lance, Chris continued incorporating altitude training camps into Lance’s training programs throughout the rest of his career.

“Altitude training camps were a major component of Lance’s comeback training program from the fall of 2008 through the summer of 2009,” commented Carmichael. “In order to bring his power output back up to the level necessary to compete at the 2009 Tour de France, we had to take complete advantage of the “Live High, Train Low” concept of altitude training.” To do this, Lance spent time alternating between Austin, Texas (nearly sea level) and Aspen, Colorado (about 9,000 feet) during the fall and even the winter of 2008. In December 2008, he went to Tenerife, in the Canary Islands, for an altitude training camp with the Astana team. And in the Spring of 2009, Lance continued alternating between Austin, Texas and Aspen, Colorado, and even competed in a short stage race held at about 8,000 feet of elevation – the Tour of the Gila in New Mexico – as his final tuneup race before competing in the 2009 Giro d’Italia. Following the Giro, Lance returned to Aspen, Colorado for one more altitude exposure (and the birth of his fourth child, Max) before traveling to Europe a bit more than a week before the start of the 2009 Tour de France.
Posted by Recovox at 3:22 PM

I hear Haemassist works much better.