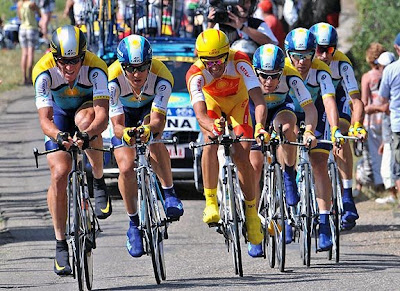 "This Tour will be exciting," said Lance Armstrong, after narrowly losing out on his first yellow jersey since 2005. "You're not going to write your final story until we're all on the top of Mont Ventoux: that's a guarantee."

For most of Tuesday's team time trial it seemed that the relationship between Armstrong and the Tour was about to take yet another extraordinary twist. With the time he clawed back in Monday's great escape, he appeared poised to take the yellow jersey from Fabian Cancellara, whose Saxo Bank team was no match for the Astana machine, even though the Danish squad seemed, for large parts, to be dragged along by the Swiss time trial star.

At 37, Armstrong would have become the oldest man ever to wear the yellow jersey. His friend, the actor Ben Stiller, was even waiting on the podium to present it to him. But on the line he missed out - by 0.22 seconds.

Yet it was a content Armstrong who faced the press, his satisfaction perhaps owing most to something he said towards the end of a long, expansive press conference.

"I think today the Tour de France is finished for some riders," said the seven-time winner. "It's [going to be] difficult - with no disrespect - to make up that time."

Armstrong revealed that he had spoken to Alberto Contador before the stage, telling him, "Let's ride perfect and make this race almost impossible to win for others." He added, "I think we can say we accomplished that."

Though Armstrong wouldn't name names, it isn't difficult to imagine that Cadel Evans (Silence-Lotto), almost three minutes down, Denis Menchov (Rabobank), almost four back, perhaps even Carlos Sastre (Cervelo), now at 2:44, are the riders whose challenge he considers "finished."

As for his near miss with yellow, he said, "That's the way it is. We did our best, at one point we thought we had it, but if I look back on our performance...it would be one thing if we had a crash, a flat tire, or the team didn't perform: that would be a disappointment. But the team was perfect.

"We lost a couple of guys, which we expected to do, but technically speaking, we were as sound as we could be. I have no regrets, I don't look at it and lose sleep or get disappointed. That's when they stopped the clock. It's a long race; maybe there's [a yellow jersey] in my future."

Armstrong admitted for the first time, though, that he had doubted his ability to perform at this Tour, saying that, when he announced his comeback, he had been too optimistic about his prospects. And he offered an apology, of sorts, to Sastre and Christian Vande Velde (Garmin-Slipstream).

"Twelve months ago, I expected it," he said in response to the question of whether he had anticipated wearing yellow again. "Here's a confession: I expected it to be easier.

"Six months ago, I did not expect it. I realised, oh shit, this is harder than I thought. That's the truth. As has been reported in the press, I was disrespectful, to Carlos Sastre, to Christian Vande Velde, to the guys who were a presence in last year's Tour - and that was not correct.

"This is not easy," continued Armstrong. "It will not be easy to win if I'm lucky enough to win [the Tour] again. There are two answers to the question: 12 months ago I expected to be here; six months ago I didn't expect it. In the Giro, I didn't expect it. Today, I'm realistic. I've got both feet on the ground; it's not going to be easy. I'm not going to be last. But it won't be like 2004, 2005, 2001; it's going to be a lot harder than I expected. That's as honest as I can say it."

Armstrong also returned to the hot topic of Monday's stage, when he made the split instigated by Columbia-HTC in the final 32km, and his two Astana teammates, Yaroslav Popovych and Haimar Zubeldia, helped drive the move clear, even though the team's apparent leader, Contador, was missing.

"A day like yesterday was exciting because it was a surprise," said Armstrong. "Yes, there was wind and a group went clear, but everybody would expect that group to contain the eight leaders, or 10 leaders, of the Tour. It was a surprise that only one of them was there.

"There were some questions about that tactic and why I was there. It's interesting to me that a press room that ought to know so much about cycling would question that. If you're in the front in the wind and there's a selection made...the question ought to be, why aren't you there?"

Perhaps that was a question Armstrong asked Contador over dinner on Monday evening.
Posted by Recovox at 1:37 PM