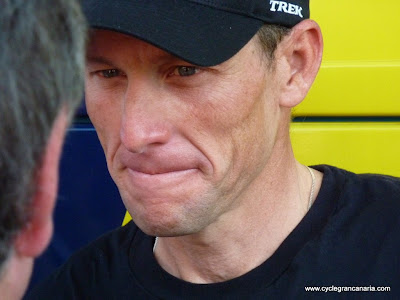 Seven-time champion Lance Armstrong said he is now fighting for second place on the Tour de France after he slipped further off the virtual podium following Wednesday's 17th stage.

Saxo Bank’s Fränk Schleck won the 169.5km ride on the toughest day in the Alps while Armstrong’s teammate, 2007 Tour champion Alberto Contador, finished second to tighten his grip on the yellow jersey.

Fränk Schleck’s brother and teammate Andy, third on the stage, is second at 2:26 while Frank is 3:25 adrift in third.

Armstrong, who started the day second overall at 1:37 behind Contador, fought hard on the 15km descent from the summit of the Col de la Colombiere to close an earlier gap and finished fifth.

The result leaves him fourth overall at 3:55 behind his Astana teammate but it is second-placed Andy Schleck the American now has in his sights.

"Second is still my goal, I guess it's still possible," said Armstrong, who vowed to battle hard during Thursday's time trial. "If I don't win it's not the end of the world, but of course I would like to be on the podium in Paris."

Armstrong was left behind when the Schleck brothers — Andy and Frank — launched a series of attacks to try to shake off Contador on the steep Col de Romme whose summit was 29km from the finish.

Thanks to their accelerations, a group which included the top five in the general classification was split, with Armstrong left behind to mark Garmin's Bradley Wiggins.

"With hindsight, I probably should have gone with the earlier acceleration," said Armstrong. "I didn't match the acceleration of the other guys, I was stuck back alongside Wiggins, I had to wait until the very end when it got a bit steeper. It's a different position than I normally find myself in, but it's not strange."

Armstrong says he will need to work hard on Thursday's time trial around Annecy to make up the time difference.

"I just need to work hard at the time trial tomorrow to make up for the time I lost today," he said. "I don't want to chase it, but I have no choice. For the Schlecks, time trials aren't their forte. They are good climbers, the course at Annecy has got a hill in it, so that could help them."

And Armstrong says both Annecy and Saturday's assault of the fearsome 21.1km climb up to Mount Ventoux will ultimately decide who is left standing on the podium in Paris come Sunday.

"We still have two big days: the time trial will shake things out, there will also be a big shake out at Mount Ventoux," he said.

Armstrong has already said he will ride in next year's race and has scheduled a press conference to reveal the name of a new sponsor on Thursday.

His close friend and mentor Johan Bruyneel also announced on Tuesday he is set to quit the Astana team as their team manager and it is widely expected that he will join the new team with Armstrong the likely leader.
Posted by Recovox at 2:48 PM