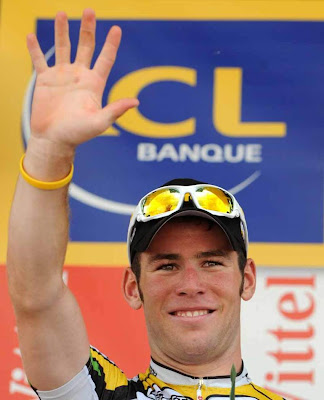 His green jersey party in Paris may be spoilt but don't tell Mark Cavendish he can't have any more cake at this year's Tour de France, winning his fifth stage in Aubenas this afternoon. After several days of soul-searching in the mountains, the Columbia-HTC train was back in action to deliver its fast man to the line.

And the brash Brit delivered reward for his team's toil, sending out a clear signal that his victorious run isn't over yet with an immaculate sprint from a long way out to raise his arms in triumph ahead of maillot vert rival Thor Hushovd and former teammate Gerald Ciolek.