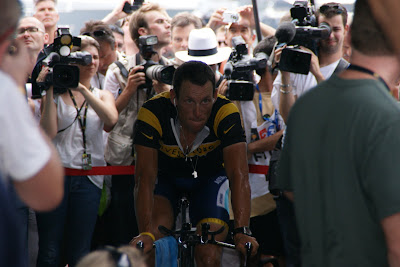 A lot of people have been asking about the workouts Lance used to prepare for the Tour de France, and especially the time trials. The tricky thing about time trial training is that you need to train at race pace even when you're not in shape to sustain efforts that difficult. In other words, we know that Lance has to be able to ride 45-50 kilometers an hour, sometimes faster, in either an individual or team time trial. But back in February and March he didn't have the power to ride that fast for the duration of a full time trial. So the workouts that I used with Lance earlier this spring - which are the same as what we used to use back when he was winning the Tour - were time trial intervals.

To perform time trial intervals, Lance would get on his time trial bike. It seems like you could perform these on either a road or time trial bike because you're concerned about power output, but it's important to remember that these workouts are also essential for developing the skill and feel necessary to handle the TT bike with confidence at race speeds. So Lance would go out, do a nice warmup and then 4 8-minute intervals that were pretty much all-out. This meant he was holding a power output and speed that was greater than what he would hold for a 60-minute time trial. In essence he was doing "over-speed" intervals, because riding at that intensity forces the body to adapt and develop the power necessary for sustaining long efforts in individual and team time trials.