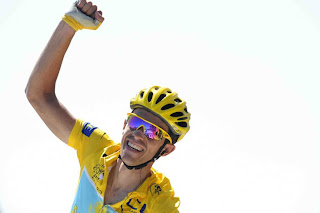 On the third and final summit of the race the 2007 champion proved imperial as his main rival Andy Schleck, of Saxo Bank, launched a series of attacks with his brother Frank on the 21.1km climb to the legendary summit of Mont Ventoux.

Schleck began the day in second overall at 4:11 behind Contador, and despite his efforts he will go into Sunday's final stage to Paris with the same deficit after finishing nearly 40 seconds behind Garate with Contador.

American seven-time champion Lance Armstrong eventually finished the stage just behind in fifth place at 41 seconds behind Garate meaning he will go into Sunday's 21st stage virtually assured of finishing on the podium for the top three.

Schleck is second overall at 4:11 while Armstrong is third on 5:24; Britain's Bradley Wiggins should finish fourth overall at 6:01.

Garate had been part of an earlier breakaway and rode most of the race's final climb in the company of German Tony Martin.

The former Spanish champion attacked once, was caught as he slowed down, but then launched another more decisive attack a few hundred metres from the summit to leave Martin down in second place.

Having started the day with a huge lead on Andy Schleck, Contador said his task was simple.

"All I had to do was control Andy Schleck. He tried several times to attack, it was a good day for him but I was on a good day as well," said 2007 champion Contador, who admitted that it had not been an easy Tour for him. "This was a very difficult Tour. Even though it looks easy for the spectators, quite a few times I had doubts whether I would win or not."

It was an incisive attack by the 24-year-old Luxemburger Andy Schleck around 12km from the summit which proved decisive for the outcome of the stage.

Schleck's move was easily countered by Contador, who looked comfortable in his trademark dancing position throughout the climb up the steep gradients of the 'Giant of Provence'.

Armstrong eventually made it back to Contador and Schleck's group but the American was initially left trailing to keep a close eye on Frank Schleck and Wiggins, potential rivals to his coveted podium place.

Up ahead Garate and Martin continued their two-man slog towards the finish line but after starting the climb with a lead of over 4:41 on Contador's group their advantage dropped to 2:50 by the time Andy first started attacking.

Italian Franco Pellizotti, wearing the polka dot jersey for the race's best climber, launched a futile attack for the stage win after he saw Contador and Schleck closing and later finished in eighth at 56 seconds.

Another attack by Andy just over 2km from the finish wiped out Wiggins' fading hopes of attacking Armstrong to overcome his 15-second deficit to the American.

It prompted Contador, Armstrong and Frank Schleck to follow but dropped the Englishman, who went on to finish the stage 10th at 1:03 and 22 seconds behind Armstrong in fourth overall.
Posted by Recovox at 8:48 AM