Cavendish Defends Against Charge Of Racism 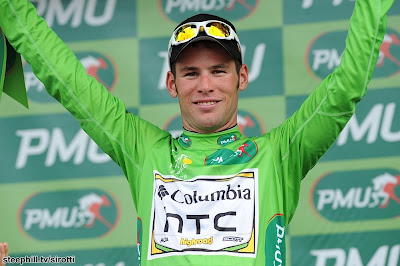 "The nationality of the rider is irrelevant if I’m going to get arsy with someone."

In his stage winner’s press conference Mark Cavendish (Columbia-HTC) brushed off a story that appeared in Wednesday’s L’Equipe, claiming that an unnamed French rider had described the British rider as "racist" and "anti-French."

"I think I’m a bit hot headed some times," said Cavendish, "but it’s irrelevant the nationality of the rider if I’m going to get arsy with someone."

"It would have been nice to have the name of the writer, or the rider who supposedly gave this quote, and I could have spoken to him about it," continued Cavendish. "I spoke to some French riders today, to see what the reaction was."

His shrug suggested that their reaction hadn’t given him any reason to worry. "When you’re a rider," he said, "[and] when you have a public profile, you know that’s going to be the situation with the press – sorry if that offends everybody. It’s gonna be like that.

"I take it as a compliment that they’re going to try and start shit about something that’s not about bike riding. They can’t criticise my bike riding.

"I made an effort this winter to try and learn French," he continued. "I’m still not confident to speak it, but to be asked questions in French, then answer in English – I’m able to do that.

"I love to come here and race," he shrugged again. "I love to be here."

One of Cavendish’s best weapons is the self-deprecating sense of humour that he sometimes displays, which he deployed here to counter the accusation of racism – and also, perhaps, another of the unnamed rider’s claims, that he is "arrogant."

"For sure I’m going to get arsy at some riders, because, you know, I’m an asshole," said Cavendish. "But it’s irrelevant their nationality, and irrelevant what they look like, or where they come from. Because, like I said, I’m an asshole.

"But I didn’t say [what the article alleged] and, really, I’d love to find out the situation," he added. "I have to laugh and brush it off my shoulders, the damage is done now: half of France has read this this morning. I just hope the person who wrote it and said it feels guilty."
Posted by Recovox at 8:24 PM