Surviving a Trial as a Team at the Tour de France 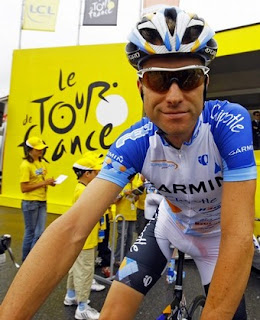 Tuesday’s team time trial was bittersweet given the circumstances: we lost four of nine riders with 28 kilometers, or about 17 miles, to go over an undulating, technical course with gale-force winds. This was a consequence of our team going fast from the start and some of our riders not matching the pace.

This isn’t the best situation to be in less than halfway through the race, but when I looked around I was reassured that we had national, Olympic and world champions, the fastest guys in the world in the time trial. I was still confident we would be all right. It was more pressure than I expected but it was all right nonetheless. As long as we stayed upright (seven teams crashed on Tuesday) and went as fast as we could I would be happy.

I’ll admit that my heart sank when Matt White, our director, came over the radio and said that there were five of us left. Five is the minimum number of riders that teams must finish with in a team time trial, so we knew we could not lose any more riders. At that point, we weren’t even halfway done with the course.

At the end of the day, you’re only as strong as your fifth rider, so it was critical that we all stayed together and didn’t panic. The person in the most precarious position had to be Ryder Hesjedal, who was in trouble on the climb and had been close to being dropped. He fought tooth and nail, not wanting to let himself, his teammates or Canada down (he’s the lone Canadian at the Tour, and the expectation of his nation’s fans is a heavy load). He pulled through for all of us.

Despite all of these challenges Matt kept us calm, motivating and guiding us through the end of the race. We were a small group of big engines and we were encouraged by negative time splits at every check (meaning we set the best time at each one), which gave us confidence that our efforts weren’t in vain.

In the end, we lost by 18 seconds and took second place. We might have had a small group for a large part of the race but we proved to be very efficient. My own personal highlight was that for once, I put the hurt on Dave Z, or Dave Zabriskie, a guy who has ripped my legs off throughout a decade of team time trials. Dave is one of the best team time trial riders in the world and takes great pride in making others, especially teammates, suffer. So, to hear him tell me that I was good, that I put him in the red eight weeks after my crash, was the most gratifying part of the day.

Tuesday night, after four days of racing, we have three guys in the top 10. Tuesday was another test. We may not have won but we were in the fight. These last four days have felt like 40 and I am sure for others 400. But fortunately for myself and my team, there’s a lot more racing left.
Posted by Recovox at 10:02 AM