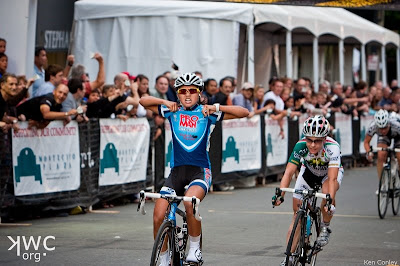 In a field of riders that included an Olympic gold medalist, the New Zealand champion and the Irish TT champ, the best of the bunch was a junior racer less than half the age of some of her competitors.

16-year-old Coryn Rivera out-sprinted all of her older rivals, to win the women's main event at the San Rafael, CA Twilight Criterium. And this high schooler did it with style and flair.

Rivera rides for the NorCal-based Proman women's team, and yes, she is the real deal. Her win in San Rafael was not a fluke. She holds US national titles in cyclocross, road and track racing, and just two weeks ago, she beat the best in SoCal, winning the Manhattan Beach Grand Prix. Pretty impressive.
Posted by Recovox at 2:11 PM