Yaroslav Popovych: "the longer you live the more you will learn" 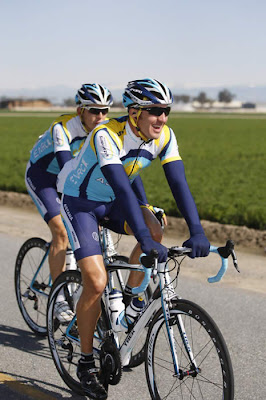 'Popo" has long been a crowd favorite with Johan Bruyneel's teams. He's always laughing and smiling and seems to enjoy his time with friends and family. Two years ago when I first interviewed Popo we used team massage therapist Elvio Barcella to translate for us, and this time I set it up to do again. But Popo told me matter-of-factly that he didn't need or want an interpreter anymore and would sit down with me and speak in English. Indeed, he gave a lovely interview, full of laughter and stories, all from a man very happy to be riding for Team Astana. This interview was conducted on February 7, 2009 during training camp.

Cathy: I hope you know how exciting it is to have you back on Johan’s team. The fans are excited, the staff is excited, your friends on the team…all of us.

Popo: (Laughs) Well, I hope that’s true! For two or three years I stayed with Johan and his teams and then I only went away for one year with Lotto. 2008 was a very difficult year for me. I didn’t feel so good with the team and they were depending so much on my results. I didn’t get the results so that meant things didn’t go well for me. I had many crashes, maybe 11 or 12 crashes, an average of one crash a month so my results were nothing. At the end of the season I had some problems with the management at Lotto. I felt like something strange was going on so I called up Johan and said, “Hey Johan, do you have a place for me?” And he told me he did have a place, he just had to check on a few things and then the next day he called me back. I told him right then I would come back to his team.

When we looked at pictures of you last year most of the time you didn’t look too happy.

Well, when you aren’t getting results and that’s what’s expected it’s hard to feel good in the team. For me it was such a different organization than what I had gotten used to. There were many riders from one country on that team. If you have 27 riders and 20 of them are from one country, the 20 stay together all the time and the others don’t go with them. Here we have guys that stay together of course but we act more like one team. I was here three years before; I spent a lot of time here so I am already like family.

I know in the past Johan has talked about what a great rider you are and that he felt some day you could be a Tour winner. Do you still think that is possible for you?

The last three or four years I have always ridden for a team that had one rider that everyone was riding for. If I stay in this position with a team then I will never be trying to win the race for me. But it’s about who is stronger. It’s my mentality, in my head, that I think in the next 2 years I can learn more and perhaps I can still think about winning a big stage race. I need to do things step-by-step. I’d like to win a five or six-stage race.

So you feel like you’re still learning things about being a professional rider?

Yeah, always. In Ukraine you say the longer you live the more you will learn. You spend your life learning. If you live 60 or 70 years you will keep learning all of that time.

You will be riding with Lance again this year.

Five or six months ago when I first heard Lance was going to race again I immediately thought it was really good. Not just for me or for the team but for cycling in general. I was really glad to know he wanted to ride again. I know in Italy everybody is waiting for the Giro because Lance will be there. Everyday in Gazzetta della Sport there is something about Lance, Lance, Lance. Many sponsors came back too because of him.

So you will ride the Giro?

Yeah, this is very exciting for me. I live there and have for a long time, nine or ten years. Italy is my home now, my wife and my baby are there. In Ukraine I have my parents and many friends but I live in Italy. So for this reason I am very excited about riding there plus one stage is 15k from my house. It’s perfect; I love the Giro.

You have had some great wins for yourself in your career. You won the white jersey as the Best Young Rider in the 2005 Tour, you got a stage win in the 2006 Tour. Is it hard to change your mindset from that of being the one that wins things to the one that helps someone else win?

I think what I am doing now is the best thing for me. I’m staying with a team I like and I’m staying with Lance. Before I met Lance of course I only saw him on television but once I came on the team and was his teammate I would eat meals with him and race with him and for me it has been really exciting. It’s like having my head in the clouds. When I took the white jersey we defended the jersey and it was all very important to me. For me it’s a good thing to help someone else. It’s important to know when someone is stronger and it’s best to ride for the person that can win.

I still remember Stage 12 when you won in the Tour in 2006. You just kept attacking and attacking and it was such fun watching you do your thing.

That was such a great day, a real highlight in my life. I was dropped on the first climb that day because we’d worked hard as a team to try to bring back a breakaway. Then I came back and was later dropped again. After 100k we were in a single line, all spread out and once I got my feedbag Alessandro Ballan attacked and I stayed with him. I followed his wheel. But I didn’t really mean to! But for 20-25km I stayed with him and was feeling pretty bad. In my mind I was wondering why the group didn’t come back to us because I didn’t want to be out there in the break! But….I started feeling better, and better, and better and of course in the end I won the stage.

Now of course this is a Kazakh team and I’m wondering if you know many of the Kazakh riders here and also, what do you think of the young, new talent that is coming onto the team?

I always speak with the Kazakh riders. We all speak Russian. I even stayed in Kazakhstan one time after a race. I see some of the young riders in training and they are going well. Of course as the year goes by we will see how they go in the races, because training is one thing and racing is something very different. I know many riders who train and train and train and ride plenty fast, but then when the race comes they do nothing.

Do you feel you can help the young Kazakh riders?

I am not the type of person who will tell others what to do. But if I am asked for help or advise of course I am happy to share my opinion or my experience. I will tell them how I would do it.

Finally I just wanted to ask how your family is. I know you have a little son, Jason.

Yes he is two years old. He’s really good. After training camp in Tenerife I went home for a few days and when I returned home I couldn’t believe how much he was talking. He would repeat everything I said to him. Every word I said, wow, mama mia he could say everything. He is so different each time I go back home. I take his photo with me everywhere. He’s a big guy, a strong kid.

My wife is good too. She just finished her schooling. She is going to teach Italian in a French school. She wants to try that. I have two dogs and two cats. The dogs are German shepherds, Vodka and Gwendol. Here is a picture of my son, look at him! When I come home he always takes my jersey or hat and wears it. And when I am packing my suitcase to go away he comes and takes everything out so I won’t go! 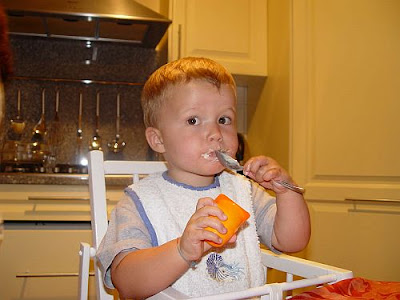