Brown wins again, but Bozzone is the story! 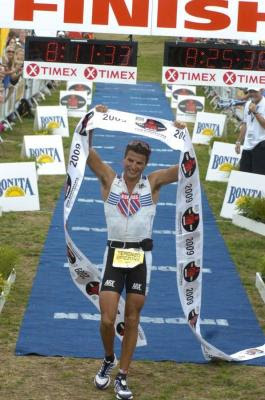 Brown, from Auckland, turned back a challenge from former ITU triathlete Terenzo Bozzone to win in eight hours, 18 minutes, 05 seconds, a course record.

Bozzone, the world 70.3 (half ironman) champion, was making his debut at Taupo and expected to challenge strongly for the Taupo title.

The swim did little to separate the contenders and for much of the bike it was a tight group of riders -- Brown, Luxembourg's Dirk Bockel, Bozzone and Germany's Jan Raphael -- at the front.

Bockel opened up a three-minute lead over the final 40km but paid the price for his efforts in the latter stages.

Brown, 36, dominated the run leg, clocking 2hr 44min 08sec as he wore down Bockel and left Bozzone running for second.

"That was a whole lot of hurt out there today, in particular the second half of the run as I was just trying to concentrate," Brown said.

"Once I passed Dirk (Bockel) I worked on putting as much distance on him as quickly as I could. I was running scared over the final few kilometres -- you never know when you might cramp or how others might be finishing.

"I just wanted to win today. The race record is a bonus and a result of the hard training I have been doing with my coaches Brendon Cameron and Mark Bone."

Bozzone admitted that he found the extra distance tough physically and mentally.

"With 40km of the bike to go I just wanted it to end, my legs were getting quite tired and both Dirk and Cameron rode away from me.

"Then when I got off the bike and started the run I thought there is no way I am going to run a marathon after riding 180km but somehow I managed to get through."

Bockel held on for third in his debut at this distance after representing Luxembourg at the Beijing Olympic Games ahead of Raphael and a fast finishing Richard Ussher, the former Coast to Coast champion improving on last year's seventh place to finish fifth despite a disappointing swim.

In the women's race, Ferguson, Denmark's former world champion Lisbeth Kristensen and Lawn led out on the cycle leg before Kristensen pulled away to open up a 3-1/2 minute advantage on to the marathon run.

Ferguson, 29, proved strongest in the run, moving past Lawn and then a tiring Kristensen before the halfway mark.

"The race was really competitive with Jo and Charlotte and earlier Lisbeth and this is definitely the most important win of my career so far," Ferguson said.

"Jo was pushing the whole way and I was running scared for a big part of the marathon.

"I only thought I had it with 7km to go, I knew I had the legs for that last part and wouldn't let Jo past me," she added.

Lawn was gracious in defeat.

"That was an incredible experience, the crowd was amazing again, I just wish I could have finished first but Gina had a great day today and was too good."