Bruyneel: Armstrong could do Giro 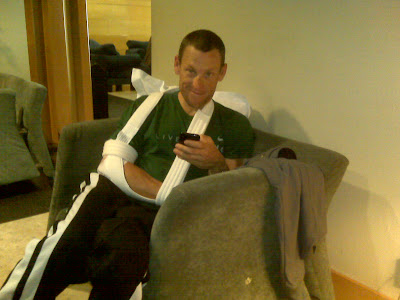 Lance twittering his fans before taking off for Austin from the airport in Spain.

Lance Armstrong will recover from a broken collarbone in time to bid for his eighth Tour de France crown in July, and may even compete in the Giro d'Italia in May, his team manager said
Tuesday.

"A broken collarbone in March does not change anything as regards the Tour de France," which starts on July 4, said Johan Bruyneel, the manager of Armstrong's Astana team.

"For the moment, we are sticking largely with the same schedule. He was going to be leaving for the U.S. after this race and then come back for the Giro, so for the moment nothing has changed," he told reporters before the start of the second stage of the Tour of Castilla y Leon in central Spain.

"Personally, I think it is still possible to take part in the Giro," which starts on May 9, but he is "still going to be less fit," said the Belgian.

Armstrong broke his collarbone when he fell along with several other riders about 20 kilometers (12 miles) from the finish line of the first stage of the Tour of Castilla y Leon on Monday.

His injury "changes the way we approach the season from now until the Tour de France," said Bruyneel. But "in terms of being there at start of the Tour, it changes nothing at all."

Armstrong meanwhile left Spain on Tuesday for his home in Texas.
Posted by Recovox at 9:34 AM