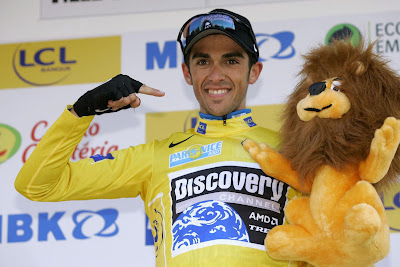 Alberto Contador will return to the roads of France on Sunday, for the race many consider to be the official start of the cycling season, Paris-Nice (March 8-15).

Although blissfully nicknamed "The Race to the Sun," Paris-Nice consists of eight stages so grueling it could also be called a mini-Tour de France.

This year's edition will provide plenty of excitement for Contador fans. The start this Sunday in Amilly, a 9.3 km time trial, will mark the first time he has raced in France since winning the Tour in 2007. In his last appearance at Paris-Nice, he won the race, becoming the only second Spanish rider in history to capture the overall title.

Contador refers to Paris-Nice as the race that introduced him to the world. Since his victory in 2007, he has won the general classification in all three of cycling's grand tours--the Tour de France, the Giro d'Italia, and the Vuelta a Espana--and no longer needs an introduction in any circle where pro cycling is known.