Ivan Basso - Back in the thick of the Italian action 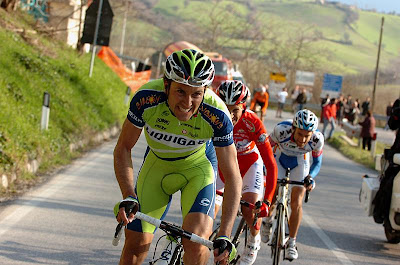 I hope you enjoyed Paris-Nice and Tirreno-Adriatico. They were great races this year due to the level of competition. While the Spaniards were battling in France, the Italians were fighting hard in Italy.

My fifth place overall was a good test as I build for the Giro d'Italia. You know from reading my last diary entry that I was able to work very little due to me banging my knee in the Tour of California. When I got home I had four days of rest and the other days it was just an hour and a half to two and a half hours of training.

I think my condition is getting there, based upon Tirreno. I was able to battle everyday in a race that was full of great riders.

The time trial was a little less than I had hoped for, to be honest. That is because from the Tour de San Luis in Argentina until Tirreno I was not able ride a time trial. Unfortunately I had to pull out of Tour of California on the eve of the crono.

At home I did not use the time trial bike because I wanted to avoid over-forcing my knee. We decided to give priority to the road bike in those days, and maybe that showed in Sunday's time trial. From here on in I will be doing specific work with my time trial bike.

I went to preview the Monte Petrano and Vesuvio stages right after Tirreno ended. I can tell you that Monte Petrano will be a tappone! [a long and hard stage - ed]. It is one I like a lot.

Thursday I went from Umbria to the Amalfi Coast to preview Vesuvio. The stage is demanding and the mountaintop arrival on the volcano will do some damage.

Those mountain stages will be a whole different matter than the Ligurian time trial. Before Tirreno I went and had another look at that stage. It is a time trial of around one and a half hours, which will be my longest time trial ever.

Lance Armstrong and Damiano Cunego are talking about using normal road bikes. I will use a mix: a bike that is somewhat between a road and time trial bike. It is very light and allows me a good position so that I can control the bike on the descents and pedal well on the climbs.

I do think there is too much focus on the descents. There are 10 kilometres in decent, which are dangerous and require attention, but the other 52 kilometres, a lot on false flats, will require a lot more attention.

It is true that I am better on the descents in recent years. It is not an advantage point for me, but I am able to defend myself. I am reaping the benefits of the base-work I did over the winter and I am very satisfied. Of course my teammate, Vincenzo Nibali, is the expert on the descents – you could say he is the new Paolo Savoldelli of descending.

Tomorrow is the big one, La Classicissima – Milano-Sanremo. I know that I don't have a chance to win, but it is an honour to race it because it is a prestigious event. I have good condition and I think that I can be great help for the team. My teammate, Daniele Bennati, has a good chance, which I see Cyclingnews agrees in its preview.

Sorry to end on a sour note, but you probably want to know about Gianni Da Ros, my ex-teammate. I had a chance to meet him at the first Liquigas training camp for a few hours, but that is it. Really I only know what was written in the newspapers and it something that is outside of the team's hands. I am at Liquigas to race and to win, I will leave these matters to the courts.

I will check in with you after Sanremo with another update. Until then...Ciao!
Ivan
Posted by Recovox at 12:37 PM