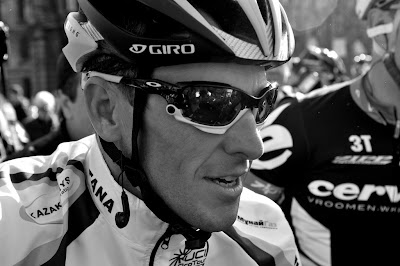 Lance Armstrong will ride 100 miles to Athens as honorary chairman of the Pelotonia Tour.

One month after his much-anticipated Tour de France comeback in July, cycling legend Lance Armstrong will set the pace in the first Columbus-to-Athens charity ride for cancer research.

Armstrong, who captured the world's imagination by beating testicular cancer, then winning a record seven consecutive Tours, will ride in the Pelotonia Tour in late August and serve as honorary chairman.

"This means everything to us," said Tom Lennox, executive director of the event. "His involvement will attract more cyclists so we can raise more money."

The tour, named for peloton, or the main pack of riders in a cycling race, is a collaboration between NetJets Inc. and Ohio State University's Comprehensive Cancer Center, including the Arthur G. James Cancer Hospital.

Organizers hope to raise $40 million in the event's first five years for cancer research at OSU. NetJets is donating $12.5 million to sponsor the tour and cover expenses so all proceeds can go to research.

"I'm coming back to Columbus to support my friends at the James and NetJets," said Armstrong, who is in Italy this weekend for a race and responded to questions by e-mail.

"I am honored to be part of the inaugural Pelotonia Tour and inspired by the commitment NetJets is making."

Doug Ulman, president and chief executive officer of the Lance Armstrong Foundation in Austin, Texas, and a close friend of the athlete, said that with Armstrong's renewed focus on competitive racing, the Pelotonia Tour is among the few charity events he'll participate in this year.

"We see Ohio as a really important location for national issues and dialogue," said Ulman, adding that representatives of more than 30 countries have requested appearances by Armstrong since the cyclist emerged from retirement in January.

Armstrong, 37, will ride 100 miles to Athens but not make the return trip. As master of ceremonies, he'll offer opening remarks, start the other riders and then get on his bike.

Against overwhelming odds, Armstrong survived testicular cancer that had spread to his brain and lungs, then became the only person to win cycling's most famous race, the Tour de France, seven times (from 1999 to 2005). He retired after the last win.

In retirement, he has focused his efforts on the Lance Armstrong Foundation, which supports people affected by cancer and pushes for cancer-research funding. The foundation has raised $300 million in the past 11 years.

He launched his racing comeback two months ago in Australia, with the goal of competing in the 2009 Tour de France, which begins July 4 in Monaco.

Ulman, himself a cancer survivor, said Armstrong will use the professional racing circuit as a forum for cancer awareness. He plans to compete in Italy, South Africa and Mexico, specifically because a cancer diagnosis carries a stigma in those countries.

"He still wants to win races, but to him, the results on the bike are not as important as the results of the global campaign," Ulman said.

Armstrong is no stranger to Columbus.

Last year, his foundation held its annual Livestrong cancer-awareness summit at Ohio State. The cyclist is friends with OSU President E. Gordon Gee and Dr. Michael Caligiuri, chief executive of the James -- both of whom will ride in the first Pelotonia.

"For Lance, cancer awareness has become the main mission," Caligiuri said. "The athletics becomes a means by which the mission is supported."

Armstrong emphasized that the Pelotonia Tour is a ride, not a race.

"This is a great ride no matter what your experience level, and I would encourage everyone to come out and support this," he said.

"If you don't have biking experience, come out and volunteer. There are plenty of ways to get involved."

For more information or to register to ride, volunteer or support a rider, visit www.pelotonia.org .
Posted by Recovox at 10:06 AM