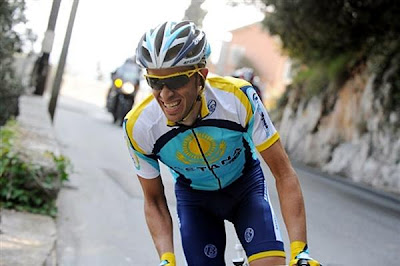 In one week of racing during Paris-Nice, Alberto Contador conquered the hearts of French cycling fans who had remained skeptical about him. He made the 2009 edition of Paris-Nice a fabulous race to watch until the end.

Contador tried to win the final stage to Nice even when he knew the leading trio's gap wasn't enough to dethrone Luis Leon Sanchez for the overall and as he realized he wasn't as fast and powerful on the flat Promenade des Anglais as his compatriot Toni Colom, a teammate last year who subsequently moved to the Russian Katusha team.

Contador was once linked to Operación Puerto before his name was later cleared. He also won the 2007 Tour de France as a member of Team Discovery Channel - not the most popular team in France after it had helped the then-retired Lance Armstrong to seven total Tour de France wins.

"It's well known that French people don't like the greatest winners," said Astana's directeur sportif Alain Gallopin, a Frenchman himself, after the last stage of Paris-Nice. He rated his protégé Contador as "the morale winner of Paris-Nice", considering his performances.

Contador himself wasn't bothered by finishing fourth place overall after the finish in Nice. He had held the leader's yellow jersey for a time during the race which it seemed quite likely he would win before he lost time after bonking on Saturday's stage seven.

"I'm very happy with this Paris-Nice," said the Spaniard Contador. "Before the last stage, I told my team I wanted to try something. I had nothing to lose. I prefer attacking than staying in the bunch like everybody. I come out of Paris-Nice with a good feeling. I've won the key stages. Everything is going well."

Contador's message was a serene reaction to the comments of his teammate Armstrong and manager Johan Bruyneel.

"Amazing talent but still a lot to learn," Amstrong had written of Contador on Twitter.

"What else is there to say than he didn't race intelligently? He only had to look after Sanchez," Astana's team manager had told L'Equipe.

Astana's directeur sportif Gallopin adopted a position the closest to that of Contador. "These are positive criticisms," he said. "It's true that Alberto is still a young rider with some weaknesses. Clearly the absence of Levi Leipheimer and Chris Horner cost us the victory.

"But what Alberto did this week is worth more than another win at Paris-Nice. He has showed what he's able to do. He's got panache. He likes what he does. He's naturally an attacker. He has won the heart of the people. He hadn't ridden in France in a year and a half, but now everybody knows he's a beautiful champion."

"We haven't won Paris-Nice, but in the car behind him, I've realized how much the fans cheer for him now. We have produced a great piece of cycling this week. Had we won Paris-Nice, we would have attracted more criticism."

Contador will return to France for the Dauphiné without his teammate Armstrong, who has chosen a different program that will put him in France for his first race this season at the Tour de France.
Posted by Recovox at 6:28 PM