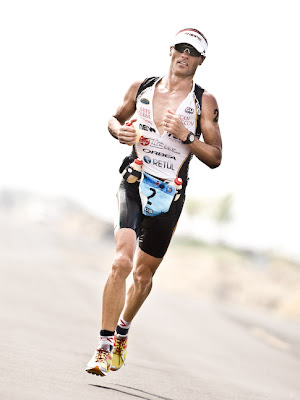 There's no need for reigning Kona champ Craig Alexander to fear the post-world championship hangover. Pitted against 2007 Kona champ Chris McCormack at this weekend's Aviva Ironman 70.3 Singapore, Crowie finished the race with a blistering 1:12:46 run--enough to top Macca by three minutes for the overall win.

Another Aussie, Pete Jacobs, dominated the first two legs of the race, and entered the second transition with a small gap on countryman Simon Thompson. Unfortunately for Jacobs and Thompson, their gap on Crowie and Macca disappeared within the first of two run laps, with Alexander leading the charge. Macca ran his way up to second, but never really contested Crowie for the win. Jacobs and Thompson finished third and fourth, respectively, completing the one-two-three-four sweep for Australia.

In the women's race, the pre-race focus was on last year's Hawaii runner-up Yvonne Van Vlerken of the Netherlands, but unfortunately for the Dutchwoman, a flat tire forced her to drop out of the race during the bike leg. It seems unlikely that Van Vlerken would've contested Brit Jodie Swallow for the overall win though, as the former short-course standout finished in 4:19:10--11 minutes ahead of runner-up Andrea Hewitt.

Van Vlerken wasn't the only top female with a little bad luck in the world's largest shipping port, as Aussie Rebekah Keat headed to the medical tent just a few minutes into the race after having a bad run-in with a pack of jellyfish. As Swallow streteched her lead throughout the flat-and-fast bike leg, Hewitt and the Czech Republic's Tereza Macel did their best not to fall too far behind.

With the result never really in doubt, Swallow crossed the line just behind the pro men, with Hewitt making her way to the finish 11 minutes later. Macel completed the podium, finishing just 17 seconds back of the Kiwi.