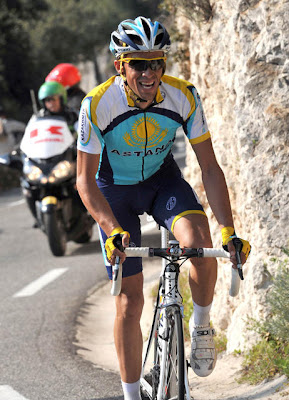 Riding with determination and plenty of heart, Team Astana’s Alberto Contador put in a big effort on Sunday’s final stage in the 67th Paris-Nice. With three climbs on the stage the slim possibility existed that he could still land on the podium after yesterday’s dramatic fall from the top. Attacking early, the three-time Grand Tour champion gave it his best shot, staying away on all of the climbs. But former teammate Toni Colom (Katusha) and Saxo Bank’s Frank Schleck were able to join him in the last 10km for a sprint to the finish. Colom took the stage win with race leader Luis Leon Sanchez (Caisse d’Epargne) crossing 17 seconds later and Contador unable to change his 4th place standing. But he had done enough to emphasize that no rider is Superman and every cyclist can have a bad day such as the one he had on stage 7. The true test of character comes in how one recovers both mentally and physically and Contador passed those tests with flying colors.
Posted by Recovox at 11:05 AM