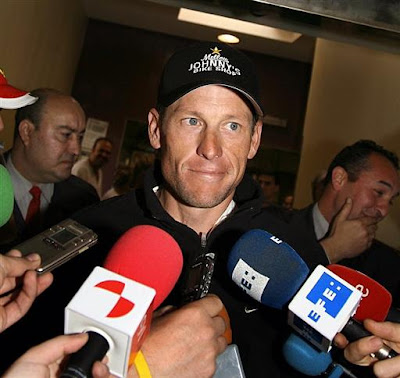 Lance Armstrong crashed and fractured his right collarbone today in the opening day of the Castilla y León stage race in Spain. The American of team Astana retired from the stage via an ambulance to a hospital in Valladolid.

Armstrong, 37, was in the main group near kilometre 160 of the 176.3-kilometres stage from Paredes De Nava to Baltanás. His group was going at a fast pace over narrow roads in pursuit of the four-man escape. He came down with a group of around 30 riders.

"Two riders crashed in front of me and I was not able to avoid them," Armstrong said to La Gazzetta dello Sport's Luigi Perna. "It the first time in my career I fractured my collarbone and I can tell you it hurts a lot."

Doctors verified that it is a clean fracture, meaning his recovery should be quick. Armstrong, who should face operation for his injury, has made contact with specialists in the United States. He should check out of the hospital this evening and is likely to travel back home to Texas.

Armstrong is preparing for the Giro d'Italia, May 9 to 31, and the Tour de France, July 4 to 26. He returned to the sport this year after a three-year retirement following his seventh Tour de France win.

"This is racing. Give me a few days to think about what I have to do. I am upset, it is a big problem ahead of the Giro d'Italia."

A broken collarbone typically needs four to six weeks for recovery, which would leave him in jeopardy for the Giro del Trentino, April 22 to 25. It would also compromise his form for the Giro d'Italia.

"I didn't see the crash," said Armstrong's former teammate Tom Danielson (Garmin-Slipstream). "It was after a climb and [Alejandro] Valverde's team attacked in the crosswind. I think the whole peloton freaked out and people were doing dumb moves to try not to get dropped. That's what I bet caused the crash."

Armstrong started his 2009 season with the Tour Down Under and Tour of California. He made his first racing return to Europe Saturday at the Milano-Sanremo, finishing 125th.

Castilla y León was the first race of the season together for Armstrong and Alberto Contador, winner of all three Grand Tours. The race was to be a time to sort out tactics prior to the Tour de France. The two last met in California for a team training camp, February 1 to 10.

Armstrong's career has been relatively injury-free. His most memorable incident came during the 2003 Tour de France stage to Luz-Ardiden when he hooked his handlebar on a fan's bag and crashed. That day he got back on his bike and won the stage and went on to win his fifth Tour.

Since his comeback, luck has not been on Armstrong's side. He crashed on the first stage of Tour of California, and then again the very next day he went down again when his personal photographer's motorcycle crashed on the second stage.

His most serious injury came in 2000, when he crashed while training in Nice, France. He fractured a vertebra in his neck. This healed in time for him to be able to take part in the Olympic Games in Sydney.
Posted by Recovox at 12:08 PM