Contador - “The year is off to a great start” 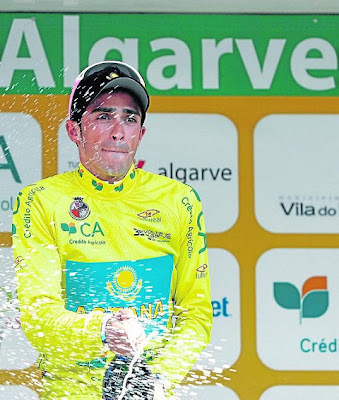 "The year is off to a great start,” he said, beaming with joy. “Coming here to ride has been a success, once and for all, because we’ve had great luck with the weather, a basic element in a race prepared with other goals.”

Asked if he had come to the Volta ao Algarve with winning in mind or only as a training ride, Contador said that the real goal “was to get into good form for Paris-Nice, but I also knew that I was going to come close to a victory if I felt good on the bike. So that’s just what happened, and I was able to win the race.”

Contador will now proceed with his race program, although he says, “There’re still a few things to see about, but the idea is that I’ll race Paris-Nice, Castilla y León, and País Vasco. We’ll then see if I’ll extend this first phase of the season to some classics, because I don’t want to get too used up at the beginning of the year.” And after resting, “I’ll ride the Dauphiné, which will be the last race to tighten up my form for the Tour de France,” he said.

Will he include the World Championships as one of his major goals this year? Contador’s answer is that the race “is usually not for pure climbers, so it’s a bit complicated to think about winning a World Championship.” The Tour, on the other hand, is at the top of his priority list. “Without a doubt, that’s my primary goal this year, keeping in mind that there are other races,” he said, alluding to the quest for other yellow jerseys at other times.

Contador denied that this victory contained a message for Lance Armstrong, as suggested by reporters. “Absolutely not. I just dedicate myself to going to the races. If I win, good, because that’s what I like to do—to ride my bike. Of course this has not been a message for Lance. He’s my teammate,” he concluded. (AC press room)
Posted by Recovox at 4:36 PM