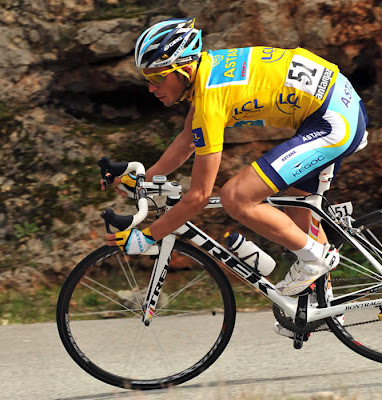 Alberto Contador waved goodbye to his yellow jersey and realistically, his chances of a second overall victory in Nice tomorrow when he fell victim to the dreaded hunger flat in the final kilometres of the stage. He acknowledged post-race that he made a big mistake in letting his friend Luis León Sánchez escape, adding that he never expected to lose nearly three minutes by the end of the stage.

The Astana rider felt no animosity toward his compatriot. "I congratulate him, we're good friends," Contador commented. "In the breakaway, we spoke and he said he'd try to win the stage. I agreed with this idea because I was convinced I could let him go and keep the gap to the minimum. He wouldn't threaten my lead. When he attacked with 15 kilometres to go, I had no sign yet of the coming hunger flat."

Looking back at stage seven, Contador realized where he had gone wrong. "I had to work since the first kilometres of the stage. From the beginning it was a very fast race and I forgot to eat and drink as much as I should have done. Therefore, in the final 10 kilometres, I was left with no strength. I was totally empty."

The Spaniard wasn't devastated. "I'm not even disappointed. These kind of things are part of cycling. In sport, we can't always win." Contador had not lost any single stage race since the Tour of Murcia one year ago. Since then he added the Tour of Castilla y Leon, the Tour of the Basque country, the Tour of Italy, the Tour of Spain and the Tour of Algarve to his palmarés. Saturday was the first time Contador has appeared to be beatable, but the Spaniard isn't panicking.

"I remain happy with my Paris-Nice," he said calmly. "I've managed to undergo two very positive tests, one in time trial, the other one in the mountain. I'm fine. My preparation for the Tour de France can go on." Contador is not the kind of rider to give a win away but he's experienced enough to understand that losing Paris-Nice is not the end of the world for a rider of his caliber.
Posted by Recovox at 6:57 PM