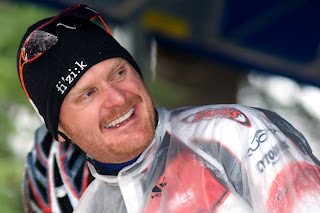 Floyd Landis is considering returning to the Tour de France four years after his 2006 stripped-victory and two-year ban from cycling.

"If I went back to the Tour de France the objective would be to win it again," Landis told Reuters. "I would like to win the race and go home and spend time with everybody that supported me and enjoy it rather than spending the next couple of years defending how I won it."

Landis said he will take the coming weeks to think about the next phase of his cycling career and whether he would race the 2010 Tour de France.

"If I want the Tour de France, I would focus on spending a year on training on it. It doesn't feel out of reach for me," he said.

This year he will be watching another American's return to France. Lance Armstrong will race the Tour de France for the first time in four years as part of his comeback.

"Anybody that knows him knows that if he's racing he's going to try and win something big, and he stated his goal is to win the Tour de France.

"I was as surprised as anybody that he wanted to put himself back out there. He's trying to get back to the top I think."