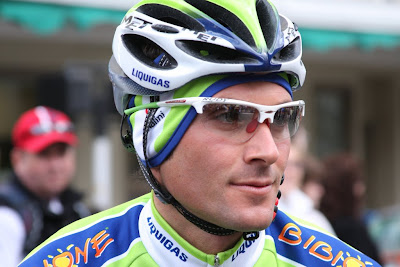 Ivan Basso returned to racing in Wednesday’s Giro del Friuli following a knee injury that sent him packing early from the Tour of California.

The Italian rider, who is back after serving a suspension for his links to the Operación Puerto doping scandal, said he was encouraged that he’s riding again without pain.

“It was a hard race but it gave me some encouragement because I didn’t feel any pain in the knee,” Basso told Italian reporters after the race. “The cold didn’t help resolve my problem but things are improving and I continue to make progress.”

Last month, the Liquigas rider crashed while warming up for the stage 6 time trial in California. He lost his chain and smashed his knee against the handlebars, forcing an early return to Italy.

Basso will race next at Tirreno-Adriatico and Giro di Trentino ahead of the Giro d’Italia, which he won in 2006 just weeks before he was removed before the start of the 2006 Tour.

“I am happy because after California the sensations are back to almost normal. Thanks to physical therapy, I’ve been able to continue some base training,” he continued. “I can return to normal training next week.”
Posted by Recovox at 9:19 AM