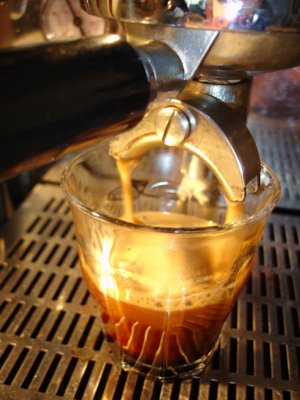 Nothing fits with cycling so much as the post-ride java stop, and that’s probably half the reason many of us get out on group rides to begin with. Caffeine is probably the most common ergogenic aid in use in cycling and the world in general, so it’s time to take a look at the science behind it…

If there is one thing that fits hand-in-hand with cycling culture, it’s coffee and caffeine. Before Gatorade ever came along, diluted and de-fizzed cola was (and often remains) the sports drink of choice, especially near the end of an endurance event. I know my espresso machine saved my sanity during the long summer way back when I was writing up my doctoral dissertation, and it remains heavily abused throughout the year.

Caffeine Pharmacology
First off the techno-speak. What is caffeine? Caffeine is a chemical in the methylxanthine group of alkaloids. It has a wide range of effects on your body, especially the nervous system and the cardiovascular system. In very general terms, it is a stimulant that prepares your brain and body for “action.” As such, some general effects include an increase in heart rate, dilation of blood vessels to ease blood flow throughout the body, and generalized excitation of the central nervous system and its sensitivity to stimulation.

As with any drug though, there are side effects, with the intensity of the side effects generally increasing with dosage. Again, the primary sites for these effects are the nervous and cardiovascular system, including tremors, impairments in motor control and coordination, anxiety, very high and irregular heart rhythms.

Coffee Junkies
We all know coffee junkies, and caffeine is clearly a drug with a high level of dependency. A standard cup of coffee contains 70-180 mg of caffeine depending on the method of preparation, while tea has much less at 20-35 mg per cup and cola about 40-60 mg. The effect of any dose depends on many factors, including body mass, built-up tolerance, etc.

So from the above, it is clear that moderation is important. If you are serious about using caffeine as an ergogenic aid rather than an excuse to drink coffee, you need to taper off the regular use of caffeine as much as possible and save its use for prior to and during actual events. If you still want the post-ride coffee, consider going decaf.

On the Road
Of course, the above science is pointless to discuss if caffeine actually did not work as an ergogenic aid. The scientific literature is pretty clear that, used correctly, caffeine does indeed help to improve performance on the bike, especially short-term, high-intensity efforts. Bell and McLellan (2) found that time to exhaustion during a high-intensity effort (80% VO2max) was greatly increased following caffeine dosing, and that the benefit was maintained when the same test was performed in the afternoon, suggesting that re-dosing was not needed for multi-event competitions.

In contrast to high-intensity exercise, the benefits of caffeine use during prolonged endurance exercise is somewhat less clear. A Scottish study had eight highly-trained cyclists perform 100 km time trial, interspersed with periodic high-intensity 1 k and 4 k efforts, and found no benefit with caffeine ingestion (5). Meanwhile, military researchers in Canada found minimal benefits from caffeine ingestion prior to a 10 km run with helmet and backpack (3). Finally, compared with carbohydrate ingestion, caffeine had no further additive benefit during 120 min cycling effort (6).

Oh yes, one final caveat. As I’ve pointed out numerous times, no ergogenic aid is going to turn a donkey into a thoroughbred, and supplements are only the finishing touches on top of solid training. Proof? Trained swimmers ingesting caffeine had significant improvements in the swimming velocity, whereas untrained swimmers were found to have absolutely no benefit from caffeine ingestion (4). So get out riding before you break out the cappuccino maker!

Not known for its coffee, the Brits still get plenty of caffeine from its fascination with tea. Therefore, this research group from Canterbury Christ Church University in the UK decided to investigate the effects of acute caffeine ingestion at a moderate dose (5 mg per kg of body weight) previously demonstrated to improve endurance performance. Subjects were eight Cat 1-3 level cyclists with at least 4 years of competitive experience and a mean best time for 16.1km TT of 21:54 min. However, keeping in mind the discussion above on sensitization of caffeine, I found it surprising that the authors did not record the normal consumption levels of caffeine in their subjects.

Subjects took part in three experimental conditions on separate days: 1) Caffeine (5 mg/kg), 2) Placebo, and 3) Control (water but no special “drink” provided). The latter condition is a nice one to further strengthen the placebo condition – ideally, caffeine should improve performance compared to both placebo and control, and there should be no difference between placebo control.

The subjects were given 1 h for the caffeine to kick in, and from there they performed a 15 min standardized warmup, followed by ergometer calibration and then a standing-start 1 km TT on a SRM Ergo ergometer.

The results followed the ideal outcome hypothesized by the research team – caffeine resulted in significant improvements in 1 km performance time (~71 vs 73 s), average speed (~51 vs 49 km/h), and average power output (~523 vs 505 W, OUCH!), and no differences at all were seen between the placebo and control. Again, this is important to demonstrate that the placebo by itself did not already affect the results.

Ergogenic Aid vs. Banned Substance?
So it seems quite clear from this study that caffeine, even in moderate doses, can have a significant effect in high-intensity performance. This leads us down a slippery slope. For many years, high doses of caffeine was considered a banned substance (if memory serves me correctly, I recall two-time world champ Gianni Bugno getting caught for it once). However, in recent years it’s been completely removed as a banned substance by WADA. In light of findings such as the Wiles et al. (9) study and the large body of evidence that caffeine is an effective ergogenic aid, this move seems quite surprising. However, it may also reflect the fact that caffeine is such an ingrained part of modern culture that it simply cannot be regulated in sport.
Posted by Recovox at 10:59 AM