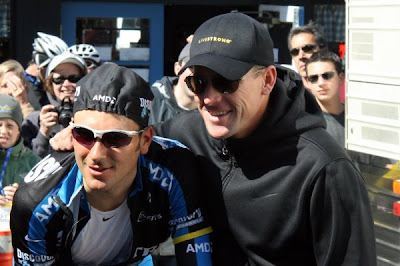 Liquigas' Ivan Basso has said that the Giro d'Italia "wouldn't be the same" without Lance Armstrong, in a message of support to his friend and one-time Tour de France rival. Armstrong fractured his collarbone during the first stage of the Vuelta a Castilla y Leon on Monday.

"I think and hope that Armstrong can recover from his misfortune to take to the start of the Giro d'Italia on May 9 in Venice," said Basso. "Without Lance, the race would no longer be the same."

Basso, who this year will ride the Giro for the first time since winning it in 2006, has entered a block of intensive training to prepare for his return to his national tour. It includes a two-week stint on Mount Teide, a volcano on the Canary Islands.

"I'm experiencing a phase of preparation in which nothing should be left to chance," said Basso. "My work is returning to full capacity after the injury I suffered to my left knee a month ago at the Tour of California."
Posted by Recovox at 9:49 PM