Armstrong to take on Contador, Sastre in Spain 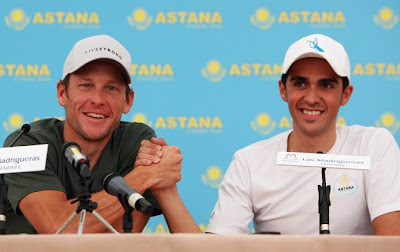 PALENCIA, Spain (AP)—Lance Armstrong will race against the past two Tour de France winners when the five-day Vuelta of Castilla and Leon begins Monday.

The seven-time Tour champion will line up against Spanish cyclists Carlos Sastre (2008) and Alberto Contador (2007) for the first time since his return this season after three and a half years in retirement.

The 37-year-old Armstrong finished 125th in the Milan-San Remo classic on Saturday, his first race in Europe since his comeback from retirement.

“(The race) will give me a real indication of where I am. I think we’re on schedule,” Armstrong said.

Also taking part in the race are Levi Leipheimer, Denis Menchov and Alejandro Valverde, who testified before the Italian Olympic Committee last month in connection with the Operation Puerto doping scandal.

Armstrong has declared that his goal is to win the Tour de France again in July, but it is unclear whether he will be the top rider for Astana with Contador on the team.

Contador, who has won the past two Castilla Leon races, was unable to defend his Tour title in 2008 because of Astana’s doping scandals the previous year. However, he did win the Giro d’Italia and Spanish Vuelta.

Before the Milan race, Armstrong played down comments he made last week suggesting Contador “still has a lot to learn.”

Armstrong said he planned to sit down with Contador to smooth things out.

The race kicks off with a mostly flat 104-mile ride between the towns of Paredes de Nava and Baltanas.
Posted by Recovox at 10:55 AM