Basso and Pozzato to Vesuvio 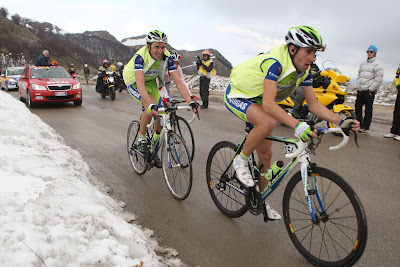 Basso and Pozzato will prepare for their helper role by scouting out two key stages of the Giro d'Italia, rather than the Poggio. The two captains for the three-week stage race (May 9-30) will ride the last 80 kilometres of stage 16 to Monte Petrano on Wednesday. On Thursday the duo will ride up the Mount Vesuvio, the final big climb of the 92nd Giro d'Italia.

Basso has already used Tirreno-Adriatico as preparation for the Giro. "I made a big leap forward with regards to the Giro. The goal was to bring Nibali to victory and in the stage to Camerino we came close. Vincenzo is one of the young ones with the most prospects and, with a bit more experience, could have gotten the victory."

Nibali attacked the four-man lead group, with Michele Scarponi (Serramenti PVC) and Stefano Garzelli (Acqua & Sapone-Caffè Mokambo) besides the two Liquigas riders, before the final climb to Camerino, but was caught with less than ten kilometres remaining.

Basso was happy to see his form improving. "I was working for the team and I think I have shown that I can return to the top. I wanted to rekindle the passion for the fans through brave riding." Basso was very pleased with his week at Tirreno-Adriatico. "And now, Sanremo!" he said.
Posted by Recovox at 10:03 AM

so and Pozzato are on different teams. Basso will lead Liquigas, not help.