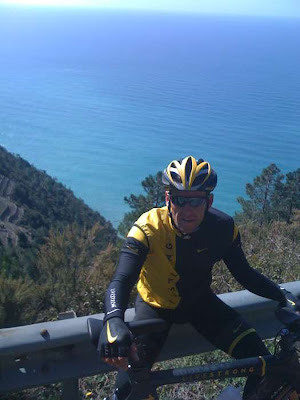 Lance Armstrong studied the hilly time trial in this year's Giro d'Italia today, revealing in a twitter message that he was stunned by the difficulty of the 62km course in the spectacular Cinque Terre coastal area.

Lance said in his message: “Giro TT is wicked hard. Never, ever flat and 62 kms. Doubtful for riding the tt bike as well. And the descents...?? Insane..”

Armstrong arrived in Europe at the weekend. He is expected to check out other key stages of the Giro d'Italia and Tour de France before heading to Milan for next Saturday's Milan-San Remo classic.
Posted by Recovox at 3:38 PM