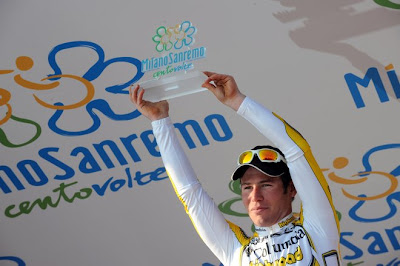 Mark Cavendish burst into tears after he beat Heinrich Haussler to win Milan-San Remo. He was also emotional when the British national anthem rang out over San Remo and later in the winner's press conference.

As ever Cavendish spoke from the heart. He understood what he has achieved by winning Milan-San Remo at the first attempt but also had some harsh words for some of his sprint rivals who predicted he would get dropped on the climbs.

Cavendish beat Haussler by just a few millimetres but the rest of the sprinters were timed at two seconds behind him. Even in the sprint at Milan-San Remo, after 300km of racing, Cavendish blew them off his wheel.

As ever he got the sprint instinctively right and knew what he was doing in every split second.

“When Haussler went he took everybody by surprise. There was a small opening on the left but it was close to the barriers, so I waited for it to open up and then went after him.”

“It was touch and go if I got him but got in his slipstream and I got him on the line. It was a close call but I'm glad I did it.”

Cavendish made it clear what he thought about his rivals who predicted he would be dropped in the climbs.

“I knew they would say that and one rider, Tom Boonen, said that every time the road went up I was dropped but if you count the times I was dropped in Tirreno-Adriatico it was one time. I knew I had to play it easy in Tirreno because I had good form and a good team here and it worked out.”

Cavendish hesitated a second and then added with a sense of revenge: “Crossing the line first was the sweetest thing but the second sweetest thing was seeing Tom Boonen go past me backwards on the climbs.”

“I just won a monument. It's the first monument I've ever ridden. I take a lot of desire to win from the fact that a lot of people write me off. I've spoken to my girlfriend and she told the commentator on British Eurosport was adamant that Haussler got me at the line, because they couldn't believe I'd won it. That's how it is, a lot of people cannot believe that I can do what I can do. But when the right people put faith in me, it's so special. The guys put so much faith in me today. It worked.

“Without his help I wouldn't have won today,” Cavendish said.

“We did the reconnaissance twice and I knew exactly where I had to be at what time and knew exactly how hard I could go and when. It was the knowledge that he gave me that got me through the bike race today.”

“The team worked perfectly for me. They knew that I knew what I had to do. We had four or five guys who could have won but they sacrificed their chances so that I could win. You could see my and Erik's emotions at the finish. I knew it could work and it did. It's a really special day for us.”

“I said maybe I can't win, I never said it was impossible, everything is possible. I knew it would be hard but I knew that if I could play a little poker in the last weeks and play along about what other people thought about me, what they thought my weaknesses were. But when the people that mattered had the faith in me, that was myself and my teammates. Tommy Lovkvist, who's such a stronger attacker, took me on the second wheel in Cipressa. Then George Hincapie guided me to the Poggio, and then went full-gas and led me to fourth wheel with 400m, that was perfect!”
Posted by Recovox at 3:14 PM