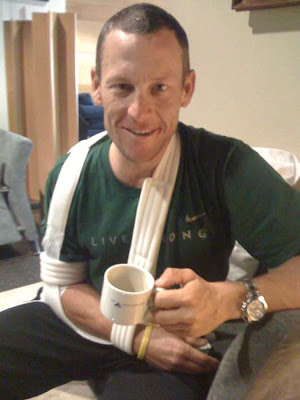 Introduction made by Mark Higgins

Higgins: We’re headed over for a more elaborate CT-scan. It seems that after looking at the film here in the States it’s a little more serious than we had originally thought. It’s angulated and displaced a little more than a clean fracture so it’s not super-serious but we are going in for another scan.

The doctor is an Austin surgeon, Doug Elenz. He’s part of an Austin sports practice and will do the surgery for Lance on Wednesday [March 25, 2009]. It’s a mid-shaft clavicle fracture but a little more serious than we originally thought from the films that came over from Spain.

Question: Tell us about the next consultation and what the prospects are.

Lance Armstrong (LA): The first part wasn’t really a consultation. It was just when I went to the hospital and they took some film. The film wasn’t that clear and wasn’t that close up so we did more films here in his office and it showed the clavicle in quite a few more pieces than we originally thought. So now we’re going to CT it again.

Question: So there are multiple fractures as opposed to just one?

LA: I would say multiple pieces.

Question: What have you been told so far about how that might complicate surgery or recovery?

LA: We’re going to plate it at 7 AM tomorrow morning [Central Time Zone, USA]. He wants clearer images from the CT-scan so he really knows what he’s dealing with when he gets in there. There will definitely be a plate placed on the top of the clavicle so he can anatomically put all this stuff back together.

LA: I don’t know. I think they try to put the puzzle back together. Not sure about removing anything.

Question: Does this mean it will take longer to recover versus what you originally thought?

LA: The surgery is tomorrow morning. Once I get out of there I need 72-hours where I do absolutely nothing. And then he’ll check me again and then maybe 3-4 days later I can do some riding on an indoor trainer. Honestly if the surgery goes well and the plate fits nicely and all comes together, I don’t think it complicates things for the future anymore than the initial opinion.

Question: Does that mean four to six weeks or are you hearing a different time frame?

LA: That seems long. This is a very common cycling injury and you hear of guys able to race in two weeks and other guys that race two months later. So we’ll have to see how the recovery goes and make sure simple stuff doesn’t occur—we don’t want to get an infection or anything. Four to six weeks seems long to me but again, time will tell. Obviously the Giro is on people’s minds and that’s about five weeks away. In my opinion I think the Giro is still very doable.

Question: Is your training for the Tour still very doable?

LA: This is definitely a setback, there’s no doubt. It’s the biggest setback I’ve had in my cycling career so it’s a new experience for me. Fortunately I’ve done a lot of off-season work that I think will help me through this. I think my condition was really coming to a place where I was going to be able to ride at the front of the races and that’s good news/bad news. Bad news that I wasn’t able to show it in the races but the good news is that if you get injured with good form you can come back with decent form…you aren’t starting from rock bottom.

Question: You must be exhausted. What about your mindset and emotions and are you willing to ride the Giro at something other than a competitive level?

LA: I am exhausted, primarily from the stress of the crash but also the trip. I literally landed in Austin about an hour ago. It’s been a long couple of days so it’s hard to think about those things. But I can’t lie, these things have gone through my mind—how (will I) approach it? Will (I) even be able to approach it? Then again, we’ll know more in the next week. We’ll know a lot. Once we get the surgery done tomorrow, get out of there with those 72 hours of rest…the quicker I can get on the bike then we’ll know. Even if I went into the Giro underprepared and used it as preparation for other events I’d still be excited to go and do that.

Question: Did you know immediately that you’d broken it when you hit the ground?

LA: I’d never done this before. I knew it hurt like hell and whenever you have a big pain like that your mind tells you to feel it to make sure nothing is sticking out but at the same time you’re a little scared to feel it! So I took a quick brush with my hand over my collarbone and what I thought were cables from my radio in fact weren’t. So I realized then it was broken pretty good.

Question: Was there any moment of thought where you wondered if this comeback was cursed or questioning if you still wanted to do it?

LA: Lying in the ditch in that situation yesterday, yeah, yeah…but I think that’s normal. You’re lying there and asking ‘What the hell am I doing here?’ But I think perhaps that’s a normal reaction and I don’t feel that way today necessarily although I’m feeling a lot of pain and ready to get this behind me. It was a shock, definitely a shock and again I’ve raced bikes for a long, long time and never had anything like that.

Question: Were you pissed off?

LA: No, quite honestly, it’s part of racing and to go as long as I’ve gone without having something happening like this is basically a miracle. So when you’re sitting there (A) - in a helluva lot of pain and (B) - you sort of think it was bound to happen at some point. It’s not good timing but it certainly could be worse. And I look at it from a different perspective, just from the curve ball of my life and what my health has thrown me in the past. Lying in that ditch with a broken collarbone was a lot better than other health scares I’ve had.

Question: How did you choose this surgeon?

LA: It’s a pretty well-known practice here in town. Obviously we looked at places all around the country. Dr. Heiden in Salt Lake City is an old friend of mine. But I wanted to come home and do the surgery here. These guys have an outstanding reputation. I know people who have had work done there and quite frankly I don’t think it’s an overly-complicated procedure although it did just become a little more complicated in the last hour. I think it’s pretty straight forward.

Question: What will the doctors be doing tomorrow?

LA: Surgery at 7AM, which will take 2-3 hours depending on what he sees. Then I’ll be home tomorrow afternoon.

Question: Will you spend the recovery period in Austin?