Contador At The Vuelta A Castilla Y Leon 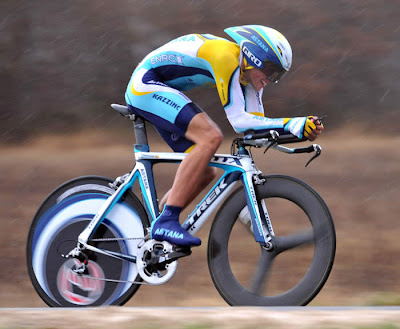 Tomorrow Alberto Contador will begin his third contest of the season, the Vuelta a Castilla y León. He's especially looking forward to his first race back in Spain, his home country. Contador, who has won the last two editions of Castilla y León, sees this race as relaxed and particularly appealing. “It’s a region that, you might say, is very familiar to me,” said Contador.

Are you looking forward to racing in Spain again?

Yes, of course, especially at Castilla y León, which is a race I really like. I’ve ridden it several times and it’s gone very well.

What are your feelings on the eve of battle? Are you thinking about a third consecutive victory?

I’m motivated and ready to race, but I see this edition as very difficult, because everything depends on the 28-kilometer time trial, since the mountain finishes will be for arriving in the group. I’ll do a test on the day of the time trial and we’ll just see what happens then, but in principle this route is better for Leipheimer.

Are you familiar with the stages?

I’ve been finding out about the route, and it’s different from past years. The time trial is flat and longer than at other times, while the mountains are not as hard, with the big summits quite spread out. It’s a less-suitable route for me.

You’ll be together with Leipheimer and Armstrong for the first time. Is this a trial run for the Tour, or a coincidence?

It’s a coincidence, but it will help us see how things go in a race, although you can’t really consider it a test because it’s different here, and although we intend to win if we can, there’s not the same pressure. Whatever happens, it’ll be good to be sharing the team, plus the press will relax a little when they see us together.

At Paris-Nice and in Tirreno-Adriatico, the general classification slipped away. Will that influence tactics at Castilla y León?

If a situation occurs in this race like at Paris-Nice or Tirreno, I think that with the strength of this team it’ll be a little easier to hold on to the leadership. But this is no more than another race for preparation…If we win, that’s the best thing, but if we don’t, it’s nothing to worry about.

How do you feel at this point in the year—better than in 2008?

The truth is that I feel really well, very happy with how the season is going and about my results so far, in spite of not winning Paris-Nice, because you can’t always win. I’m very happy with my preparation and I feel rested, physically and mentally. My results leave me confident and calm about continuing prep for the Tour de France.

The roster for this race is spectacular. Who are the favorites?

There’s more than enough to talk about on this list of names: all of them are clearly favorites. Above all, the race is riding on the time trial, and the best of the specialists will be there, like Zabriskie, Vandevelde, Rubén Plaza, Menchov, Valverde, Gutiérrez, Armstrong, Leipheimer… There’s a ton of great riders who’re going, and they’ll make the fight for victory a tough one. The favorites in the time trial are also the favorites for the overall win.