Armstrong: "Contador is too nervous" 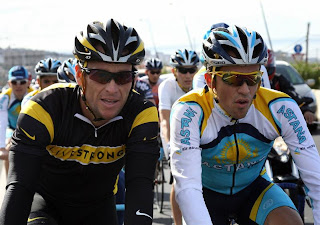 Lance Armstrong took aim at the performance of his teammate Alberto Contador in an interview with French newspaper L'Equipe. "Contador has a lot to learn," Armstrong said. "He is the best in the world. The only negative thing, and I say this with great respect, is that he is too nervous. He is too strong to be so nervous. He has a good team manager and a strong team. Why get nervous?"

Armstrong's comments were in relation to Contador's performance in Paris-Nice last week where the Spaniard won two stages but lost the overall leader's jersey to Luis León Sánchez on stage seven.

The two last met in California for a team training camp, February 1 to 10, before Armstrong raced the Tour of California. They will race together for the first time at the Vuelta a Castilla y León, March 23 to 27.

Armstrong added that he wants to peak for the first day of the Tour de France. This year's race starts with a 15-kilometre time trial in Monaco, which Armstrong previewed last week.

This Saturday Armstrong will line up for his first race in Europe since the 2005 Tour de France at Milano-Sanremo.
Posted by Recovox at 9:34 AM