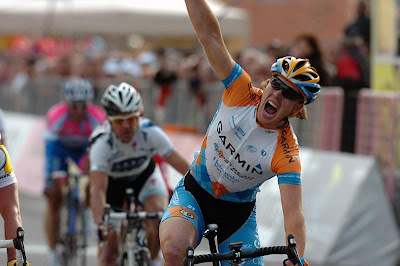 Tyler Farrar won the third stage of Italy's Tirreno-Adriatico Friday in a sprint finish over the world's best sprinters. The American of Garmin-Slipstream over-powered Mark Cavendish (Columbia-Highroad), Enrico Rossi (Ceramica Flaminia-Bossini Docce) and Robbie McEwen (Katusha) at the end of a 166-kilometre stage from Fucecchio to Santa Croce sull'Arno.

"Cavendish is the best sprinter in the world; everyone wants to beat him," said Farrar. "My condition is good and I have a very strong team here. Dean and the others did a huge amount of work for me. ... It's my most important win to date."

Farrar had the confidence gained racing with top-level teams, like Garmin and Cofidis, for the past several years, not to mention several important wins: a Tour du Poitou stage (2008), the GP Correios de Portugal (2007) and Tour de l'Avenir stages (2005 & 2004).

"I had a chance to battle these guys in the Tour of California. Today is huge relief, now I would like to go for the Classics in Belgium," said Farrar.

His confidence will be that much higher for Belgium, where he lives, thanks to beating not only Cavendish and McEwen, but also Tom Boonen (Quick Step), Thor Hushovd (Cervélo TestTeam), Alessandro Petacchi (LPR Brakes-Farnese Vini) and Daniele Bennati (Liquigas).

"I went at 300 metres," said Petacchi, who had Cavendish and then Farrar on his wheel. "I think Cavendish suffered from the speed and maybe I paid a little bit from yesterday's effort.
Posted by Recovox at 10:13 AM