Cavendish the Sanremo man for Columbia 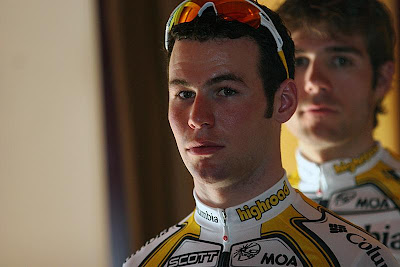 Columbia-Highroad tackles Milano-Sanremo this weekend with high hopes for Mark Cavendish, the recent winner of the last stage of Tirreno-Adriatico. However, the squad has no intention of placing its top sprinter under any pressure to come up with a specific result.

"We're very aware that it will be Mark's first participation in Milano-Sanremo," said Sports Director Valerio Piva. "If he's there in the front group after the [final climb of the] Poggio, then of course the team will back him up 100 percent for the sprint. But if he's not up there, it's not the end of the world. This is his first Sanremo and his main objective is to get the experience of racing it.

"We've got guys like Thomas [Lövkvist], George Hincapie and Maxime [Monfort] taking part, too, all of whom are going well and who could make it into a break.

"Milano-Sanremo is always one of the most unpredictable races of the season," he said. "You have to be prepared for all sorts of outcomes as we saw last year – a bunch sprint is only one of them."

Mark Renshaw received some advice before the race. "Someone said to me that Sanremo is the easiest race to finish but the hardest one to win. I've ridden it three times and it's so long that the last two climbs, which aren't so difficult, become much more of a challenge. The wind direction has a major effect as well. If it's a tailwind then it's just 45 minutes longer than a normal race, but if it's a strong headwind it can last up to seven and a half hours."

There is an added twist in the finale. "The finish is more complicated than it used to be, we checked it out today [Wednesday] as part of a training ride. There's a couple of extra corners which make it more difficult. Then the new climb they brought in last year [Le Manie] makes a tough race even harder."

Renshaw is ready for the challenges, though. "I'm feeling good after Paris-Nice, I got second in one stage [two], and my condition is good. My main mission will be to go with Mark [Cavendish] and support him as best I can."
Posted by Recovox at 8:50 AM