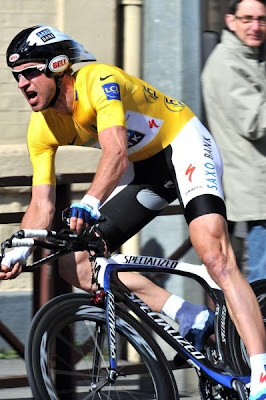 The veteran German was fifth in the 8.3km course in Charleville-Mézières and held off a challenge from Danny Pate (Garmin-Slipstream), who started the third and final stage in second place, just seven seconds off Voigt’s time.

The 38-year-old Voigt joins Raymond Poulidor and Emile Idée as the only five-time winners of the race dubbed the “mini Tour de France.” Voigt won the overall title in 1999 and 2004 before sweeping to a hat-trick with three consecutive titles from 2007-09.

Recently retired Bobby Julich remains the only American to have won the early season stage race, taking the overall crown in 1998 and 2005.
Posted by Recovox at 9:14 AM