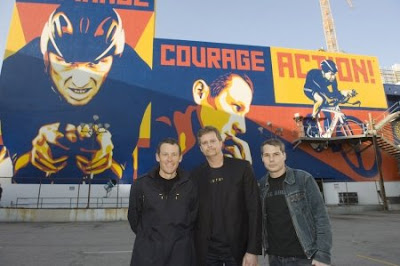 Nike and Lance Armstrong have teamed up to launch a global art exhibition and sale that provides a new way to support the Lance Armstrong Foundation (LAF) and its LIVESTRONG™ Global Cancer Campaign. The project was announced at an event in Los Angeles today, for over 700 people from the worlds of art, cycling, entertainment and sports. Mark Parker, President & CEO of Nike Inc.; Lance Armstrong, LAF founder and chairman, cancer survivor and seven-time Tour de France champion; and artists Shepard Fairey and Barry McGee came together to announce the “Stages” tour.

“Stages” brings together close to 20 of the world’s most creative and diverse artists to create original works of art inspired by Armstrong and his mission to raise awareness of the global cancer burden. This unique project brings together the world of art, philanthropy and sport, in a way never before seen, to create artwork that represents the power of human potential in overcoming adversity.

Artists participating in the “Stages” tour include names such as Shepard Fairey, , Tom Sachs, Barry McGee and Marc Newson. All artists will begin working on their pieces between now and July, leading to an exhibition at the world renowned Emmanuel Perrotin Gallery in Paris on July 16th, 2009.

“Nike has been a committed partner in driving global awareness of the Lance Armstrong Foundation, while raising millions to help in the fight against cancer,” said Mark Parker. “The “Stages” tour brings people together, using their talents to inspire and engage more people in the fight against cancer.” Once it’s unveiled in Paris, each one-of-a-kind work of art will go on sale with proceeds benefiting the LAF. The exhibit will also travel to New York, Portland, Oregon and LA with final dates to be announced. 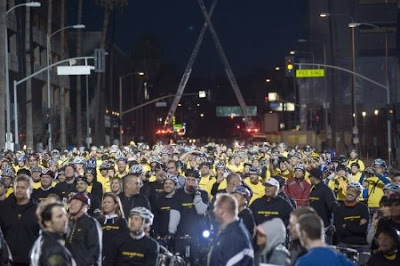 “This year it’s about more than winning the race. It’s about people coming together to use our talents and abilities for a cause bigger than ourselves and doing everything within our power to help those in their fight to overcome cancer,” said Lance Armstrong. “This endeavor will help raise awareness and much needed funds for the foundation and those who need it most, researchers, patients, and their families.”

To help kick off the “Stages” artist tour, Lance Armstrong led 700 cyclists on a two-mile community bike ride in Los Angeles today beginning at the Children’s Hospital on Sunset Boulevard and ending at the Montalbán Theater. Following the ride, Lance was joined by several of the artists participating in the project to unveil Shepard Fairey’s latest work of art inspired by Lance Armstrong. 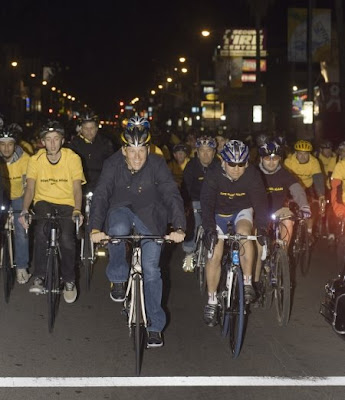