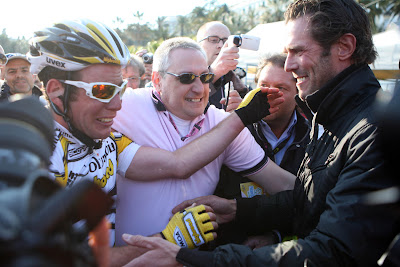 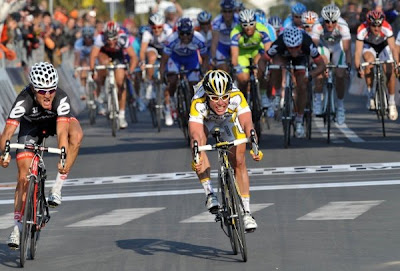 If there was any doubt about who is cycling’s most exciting sprinter, Mark Cavendish erased it Saturday with an explosive victory in the 100th Milan-San Remo.

Judges had to break out the zoom lens to determine Cavendish the winner in a photo-finish to a devastated Heinrich Haussler as Cervélo Test Team went two-three with Thor Hushovd rounding out the podium.

Haussler pounced out of the left side of the pack with 350 meters to go - he said to set up Hushovd - only to look back and see that Hushovd wasn’t on his wheel and with a surging Cavendish closing in fast.

“I saw Cavendish coming. If I sprinted for myself, I wouldn’t have gone so early. I was leading out for Thor. I wanted to get off with 100 meters, but I had to keep going,” Haussler said at the line. “I looked behind and I saw bloody Cavendish coming, really fast. My legs were just dying. It’s disappointing. Second place is the first loser. No, no, no, I cannot be satisfied. I know my form is good.”

San Remo rookie Cavendish defied the experts in the 298km classic and made it over the late, decisive climbs at Cipressa and Poggio to arrive for the group sprint of about 30 riders.

"It's the most beautiful day of my life. I didn't expect to win. I couldn't dream of anything better," said Cavendish, who won four stages in last year's Tour de France. "Hincapie helped me enormously, but the whole team stayed with me on the climbs. When Haussler broke away at top speed I was scared, but it makes the victory even sweeter."

Lance Armstrong (Astana) lost contact over the Cipressa as the peloton roared over the final decisive climbs and finished in the second group.

The race, the first major one-day classic of the season, saw a pack of 40 cyclists jostle for position through the winding streets of San Remo, with Haussler seemingly destined for victory after breaking away in the closing 400 metres, only for Cavendish to chase him down in dramatic fashion.

Tirreno-Adriatico winner Michele Scarponi of the Diquigiovanni team had stretched the field by leading the assault on the 5.6km climb up the Cipressa, the penultimate hill before the finish.

America's Lance Armstrong, making his comeback this year after a three-and-a-half year absence from the sport, fell off the pace as the peloton tackled the Cipressa and eventually finished well down the field.

The major sprinters assembled in a roughly 60-strong leading group approaching the Poggio, the race's final climb, with the Belgian Quick Step team leading the attack on the 3.5km ascent.

Scarponi's teammate Davide Rebellin made the first attempt to break away but was quickly reined in, with Katusha's Filippo Pozzato - the runner-up in 2008 - moving past him at the crest of the 6.2km descent to the finish line.

Pozzato, though, couldn't establish any kind of lead, being sucked back into the leading group with two kilometres to go.

Haussler sparked the chase for victory as the finishing line loomed into view, but Cavendish produced a tremendous burst of speed to pip him right on the line in a photo-finish.