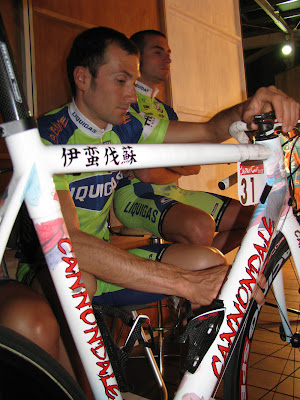 Ivan Basso’s Cannondale Super Six is currently being auctioned by Cannondale Japan, with proceeds to be donated to the Seal Emiko Fund.

The bike, custom-painted by Artech Design near Bologna, Italy, features a Japanese warrior theme and Japanese writing that denotes the occasion of Basso’s return to pro cycling in the 2008 Japan Cup. It was raced by Basso to a third-place finish in the race and is truly one of a kind.

Emiko Seal is a committee member of JACC, the Japan Adventure Cyclist Club. In 1989, she started a world tour by bicycle with her husband Steve. Together, they cycled 77 countries and over 11,000 kilometers. Just before completing the goal in 2001, she was diagnosed with cancer and was given just six months to live. With her usual determination, she fought the cancer into remission and recommenced the tour in 2004. Last year, the cancer returned and Emiko now fights for her life. She continues her lectures “Dream, hope and courage” and has written a book “Beyond Cancer, Aim Towards the Horizon”. “Cancer has touched my own family, too,” says Ivan Basso. “It’s something that has united many of us in cycling, and I’m proud that this bicycle is going to an excellent cause.”

The auction can be found from http://www.cyclestyle.net/ and lasts until March 20. Or just click on the title link.
Posted by Recovox at 10:53 AM