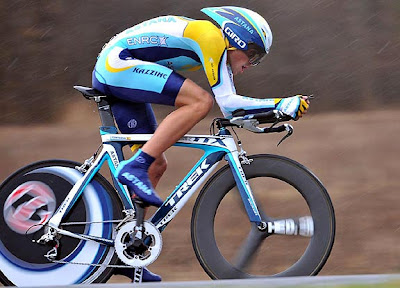 That was so very, very, good. Not only did Alberto Contador win a short, flat, time trial stage, he beat some of the best specialists in the business as well! Millar, Chavanel, Wiggins, Sanchez, Posthuma are just a few of the names that Astana’s team-leader demolished today. What a way to make your comeback into French racing, in a race organised by the Tour de France. If ever there was any doubt as to how much Contador and Astana have been missed in French competitions, today showed the proof, and now it is all systems go for an attempt to win Paris-Nice for a second time.

It cannot have gone unnoticed that Contador didn’t just beat the fast, tall, heavily-built men on the flat, he also put serious time into the few rivals that might launch an attack on the hillier stages. Chavanel and Colom at 19-seconds, Evans at 31-seconds, Nocentini and Kreuziger at 34-seconds – these are all massive time gains in an eight-day race! The important thing is how Astana treats the next few days. It is obvious that there are very few top sprinters here, which means the usual team-dominated first few days are far from guaranteed. Lampre will try and propel Loronzetto to the finish tomorrow, and Katusha must have the same tactics in mind for Steegmans. But the winds that are threatening to blow on Monday, as well as the lack of sprinters teams, means that Astana might have to shoulder most of the chasing work from day one.

Surely, the team wants to let the race-lead go somewhere else? As does Garmin and Caisse, for whom Daniel Martin and Luis Leon Sanchez harbour overall ambitions towards the end of this week? Yes, but to who can the race-lead safely go? Rabobank, Columbia and Katusha have the chance to wreak havoc in the winds and even get some of their men away in a risk-all escape if they are allowed a small degree of indulgence. Because of the size of Contador’s advantage over his G.C rivals, it seems obvious Luis Sanchez is the main threat, and that Caisse and Astana could therefore form a joint vanguard against all others before letting their leaders do battle on Friday’s stage to La Montage de Lure. Still, today is all about Contador and his incredible time trial in the pouring rain. There were many messages attached to the wake of his speed in central France, yet it will take months to acknowledge just how important today’s ride was. We’ll just have to wait and see…
Posted by Recovox at 8:35 PM