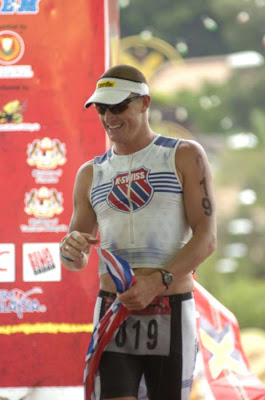 Luke McKenzie ran away from Bryan Rhodes to claim his second Ironman title today, while Belinda Granger used a stellar bike ride to decimate her competition before the marathon even began as the two made it a great day for Australia here in Langkawi, Malaysia.

“I’m so ecstatic,” McKenzie said of his win. “I had the best race today. He (Rhodes) was just sitting that minute behind for the first 21 km. I kept wondering if he had it, if he was just waiting to reel me in the last half.”

Last year at Ironman Japan, McKenzie led from start to finish for his first Ironman win. Today he had to share the leading duties with Rhodes, a two-time winner here in Malaysia. In the end, though, McKenzie proved to be too strong on the run for the Kiwi, who had nothing but praise for his rival after the race. “It was a great duel,” Rhodes said at the finish line.

McKenzie attributed the win to patience.

“It’s been a bit of a learning curve,” he said. “The way I race is from the front and sometimes it works and sometimes it doesn’t. I’ve found how to get it ride. I have to be patient through the swim and bike and take care of myself through the first 21 km of the marathon.”

Brazil’s Reinaldo Colucci spent the first two-thirds of the bike near McKenzie and Rhodes, but would eventually be dropped by the pair … and would eventually drop out of the race. That left Brian Fuller to hang on in third for the entire marathon. While Gernot Siedl managed to run himself to fourth at one point, he would fade over the closing miles of the marathon and eventually finish eighth.

Two-time Olympian Hiroyuki Nishiuchi managed to hang on for fourth, while Petr Vabrousek managed a fifth place finish here today, the first time he hadn’t finished in the top three in six starts here in Langkawi. Granger followed up a great swim with a stellar bike ride that allowed her to have “the march of death” through the marathon and still comfortably win the race in a record-setting 9:21.

“This race isn’t about being the best swimmer, biker or runner, it’s about who is the toughest,” Granger said. “It’s a war of attrition out there. I knew I had a good swim and a really good bike ride, but in the end it’s about who’s willing to gut it out. For the first 30 km I was taking it quite easy. That last 12 km it wouldn’t have mattered if I had a 50-minute lead, it was tough.”Granger’s incredible bike ride saw her racing with some of the lead men through the first half of the ride, including her husband Justin. “Justin and I swam side by side for the entire swim,” Granger said with a laugh at the finish line. “I had to close my eyes because he breathes to the right and I breathe to the left and we were looking at each other every stroke. I had to close my eyes because I couldn’t stop laughing.

“We rode together (legally) for the first 90 km, but he was on the front the entire time. He had no idea where I was. He never saw me. We had two draft busters with us the entire time, so it was legal. At 95 km he took off with the rest of the men, so I was on my own for the second half of the bike.”

Granger dominated the bike so much that she came into T2 with a lead of almost 20 minutes on her old Team TBB teammates Donna Phelan and Maki Nishiuchi. (In case you’re wondering if there are any hard feelings, this morning Granger leant Nishiuchi a speedsuit and proceeded to watch the Japanese woman beat her out of the water wearing it!) Pre-race favorite Erika Csomor was almost a half-hour behind by the end of the ride, while 2007 Ironman Malaysia champ Nicole Leder was more than a half-hour behind starting the marathon.

“She’s one of the best (Ironman) marathon runners in the world,” Granger said of Leder after the race, citing an example of having lost a 22-minute lead to the German in the marathon before.

Leder used a 3:17 marathon to run her way to second, passing Csomor (who eventually dropped out), Phelan and Nishiuchi along the way. Leder was thrilled with her second place finish – especially since the thermometer was sitting at –5 degrees Celsius when she left home four days ago.

“I had to drop back on the bike,” Leder said after the race. “At the airport I felt like I was on a barbecue. The first lap of the run I didn’t feel that well, but then I got into a good rhythm. I had three good laps, then the last lap I was just suffering. I was glad I had some time on the other girls so I could take it easy.”

Granger, known for her hard training and racing calendar, will now take a bit of a well-earned break.

“I have a few medical issues that I need to take care of, so I’m going to be out of things for a month or so,” she said. “I wanted to get a good race before I went in for surgery, so now I feel like I can take a break.”