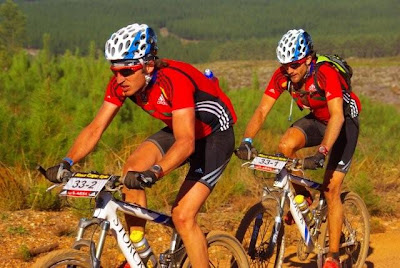 Now in its sixth year, the race will begin with a prologue on the slopes of Table Mountain in Capetown, South Africa, and will finish eight days and 685km later at the Lourensford Wine Estate in Somerset West.

1,200 athletes from 46 countries will participate in the African stage race, the only stage race categorized as hors categorie or "HC" by the UCI. Mountain bikers are coming all the way from nationsl like Argentina, Australia, Brazil, Canada, Japan, Israel, Mexico, Russia, Sweden and Venezuela to earn points and have an epic race experience. Throughout the week, the 600 two-person teams will climb 14,663 meters, the equivalent of two trips up Mount Everest.

Returning for the 2009 edition is a team time trial prologue of 16.5km on the slopes of the designated world heritage, site Table Mountain. Teams will depart at 30-second intervals and race against the clock to determine their start seeding for stage one, which begins in Gordon Bay the following day.

The racers will team up to form duo men's, women's, mixed and masters teams.

The Cape Epic is a massive logistics project with organizers pitching over 1,400 tents per day and transporting 275 tons of equipment from stage town to stage town. Twenty-seven heavy-duty trucks and transporters and over 700 crew, volunteers and supplier representatives are involved in implementing the largest mountain bike stage race in the world.