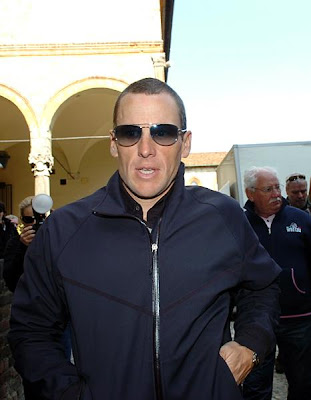 Lance Armstrong is on the eve of his return to racing in Europe. The American from Texas arrived at Milan's Castello Sforzesco Friday to hold a press conference one day before the 298-kilometre Milano-Sanremo, three years and eight months since he ended his career at the 2005 Tour de France.

The team Astana rider, 37, started his comeback journey in the fall of 2008 with some local races, but he pinned on his race number for the first time at the Tour Down Under in January. In February, he continued his racing programme in the Tour of California, but the Milano-Sanremo is the first time he is racing in an event that is so much a part of cycling's history.

Armstrong retired from the sport immediately after his seventh Tour de France victory. In his post-cancer career he excelled in stage races, not one-day races, although he did race a few of them. His last one was the 2005 Ronde van Vlaanderen, and his last appearance at Milano-Sanremo was in 2002.

"My first Milano-Sanremo was in 1993, with Motorola," said Armstrong. "I remember it well, even if I was not a factor because I was there to work for Max Sciandri."

"I think it is my sixth or seventh time here [at Milano-Sanremo]. For me it represents a lot of the history and beauty in cycling. It has a certain mystique. Unfortunately, I could not do the Tour of Flanders because of scheduling, but I wanted to do more Classics."

"It is good for training as well. It is hard to go out and do 300 kilometres in training."

"For me it represents a lot of the history and beauty in cycling."

What follows are some of the questions asked by members of the press attending the conference and Armstrong's replies.

What is your main ambition?

Lance Armstrong: I want to have a good and safe day. We know this race can be dangerous. If there are 30 or 40 guys in the end, I hope I am there with them. This race was never my strong suit, but I hope to be somewhat involved.

Did you test the new Le Mànie climb [94 kilometres before finish] this morning?

LA: I wanted to see it, to understand the run-in. I know how the finale of this race is dangerous and nervous.

I also wanted to ride the climb to see how difficult it is. The turn before it is narrow, so it will be fight to be in position. I also noted the wind: if it is the same as it was today, it won't be an easy start. It was a strong crosswind out there.

LA: I don't remember it well, I am not young, and I forget a lot! If you look at Eddy Merckx's seven victories, he attacked in nearly the same place during all seven years. It has become, faster and more dangerous. It is beautiful, starting here, down to the coast and then winding down to Sanremo.

What will you do if you have a chance at victory?

LA: I am a racer, and if I had a chance to win, I would not pass it up. I don't know if I am there [in form] yet, there are guys who will be looking to attack in those key points where Merckx went. However, once a racer, always a racer.

It will be the first time in many years that you are in a race with Filippo Simeoni. If you have a chance to speak with him, what will you say?

LA: It is not an issue. I think it is an issue only for the press. I know these internal dramas are good for the sport, but I have no problem with him personally. It is time for all of us to move along. It is an old story, and I have no animosity toward him.

Who will win tomorrow?

LA: I don't know, but there is list of suspects including [Tom] Boonen, [Alessandro] Petacchi, [Thor] Hushovd, [Stuart] O'Grady...

Where are you in your training?

LA: I am progressing. Days like tomorrow can tell you many things. I will get some indicators then and also in Castilla y León next week. I think I am on schedule.

What are your emotions upon returning here in Europe?

LA: I have just spent 10 days in the south of France where I spent a lot of my career. I was able to reflect and think about whether the rides felt the same as before. I felt the same, and it is more fun and even better. In my head I feel like I am doing the right thing and having a good time.

The reaction [in Europe] has been nice. People are in their cars or scooters, and they stop for my autograph. The other day a man pulled up to me on a climb, asking me to sign an autograph while I was climbing!

How is your physical condition?

LA:In my first couple of races, my back was a problem. Since I went back to my old saddle, my back problem cleared up. My fountain of youth is my bike seat, I guess.

Of course, when I saw that photo in L'Equipe the other day, the amount of grey hair I saw surprised me.

Andreas Klöden, Levi Leipheimer and Alberto Contador have all won so far this season. Is it as important to win before the Tour since they are also doing it?

LA We all like that taste and that feeling; I would like to win something. In the past there have been years when I did not win.

I have to show some improvements at the time trial at Castilla y León. I don't need it, but I would like to get a little taste of victory. My local race in Austin does not count.

At the Tour would you be happy with just helping a teammate win?

LA:Some people think that the same rider who stepped off his bike in 2005 is the same as the one in 2009. I don't want to be unfair; it would be a shame if I did not help Alberto if he is doing better than I am. Having said that, I am going to work every day as hard as I can.

What has gone wrong in cycling, like in Germany, since you retired?

LA: I think that when people follow anything, a bike race, or a company, or a band, or a family member... When they feel like that investment has not been returned, they are upset. I think that is what is going on with German cycling. They are turned off; they say, "That's it". It is a shame; there have been a lot of good German cyclists and events.

It has to move on, the Germans need to forgive and forget.
Posted by Recovox at 12:16 PM