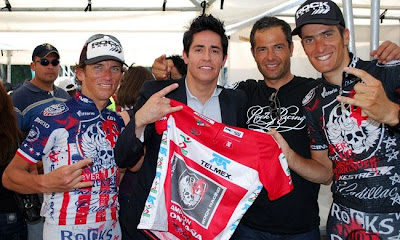 Mexico City – Rock Racing celebrated one of its most prolific days in its history Sunday when David Vitoria earned the King of the Mountains jersey, capping a Vuelta Mexico Telmex that saw the third-year squad win the team classification while placing three riders in the top 10.

But the party didn’t stop there. In Dominguez Hills, Calif., Justin Williams and Rahsaan Bahati scored a 1-2 finish, respectively, at the Arctic Avenue Dominguez Hills Criterium. It marked the second consecutive weekend the pair have swept the two top places at a criterium, with Bahati taking the honors ahead of Williams at the Merco Classic Downtown Criterium Feb. 28 in Merced, Calif.

With 11 victories in hand in a season that is barely two months old, Rock Racing Owner Michael Ball said even he couldn’t have imagined such success.

“This is truly a testament to the power of teamwork,” Ball said. “These guys faced a lot of adversity in the off-season, but when it came to race, they got down to business. I knew we were going to be a contender, but this is also a tribute to the work our directors, Rudy Pevenage and Laurenzo LaPage, have done.”

At the Vuelta Mexico, Vitoria earned the King of the Mountains jersey to go along with a third-place finish overall behind Jackson Rodriguez (Serramenti Pvc Diquigiovanni-Androni Giocattoli) and runner-up Carlos Lopez (Canel’s Turbo). Rock Racing also put Glen Chadwick (fifth) and Enrique Gutierrez (10th) in the top 10 of the eight-day, 785-mile (1,264 km) race.

Rock Racing’s triumph over 19 other squads in the team classification marked its first team title in history.
Posted by Recovox at 11:26 AM