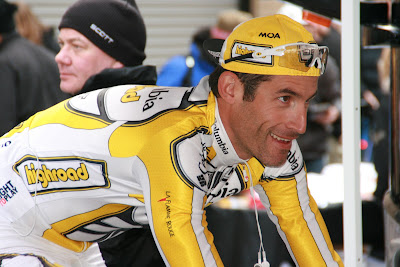 George Hincapie, the most well-known American cyclist not named Lance, is the veteran leader of the Columbia-Highroad pro team. The 35-year-old started his illustrious career winning the under-17 road race national championship in 1988. Hincapie rode shotgun with Armstrong during his seven titles at the Tour de France. He has also won everything from Spring Classics to stages in the Tour de France to US Pro titles and the overall title at the 2007 Tour of Missouri. Before the start of the 2009 Milan-San Remo, held this year on Mar. 21, Hincapie offered some perspective on his team, the new face of the pro cycling season, and the start of Spring Classics season.

It's funny. Back when I started racing, Milan-San Remo was really the "real" start of the season. Today that is not the case, as there are a lot of early season races, such as the Tour of California, that are both really hard and really important to our sponsors. Yet nevertheless, Milan-San Remo is a ProTour classic and almost 300 kilometers long, so it stands apart. Milan-San Remo is really a race unlike anything else.

Once we hit the hills we may slow down a bit, but the general feeling is that we are just going faster and faster as we approach the finish in San Remo.

Since last year they have added one more significant climb, the Manie, in the last 100 kilometers, and that really made the race harder and broke up the racing more.

But regardless, the race shifts into final gear on the Cipressa, which is one of the two final climbs, and from there it is all out to San Remo. Already 10 to 15 km before the Cipressa, we are just going full gas. Everybody is fighting for position, everybody wants to be in front or able to get to the front on the climb. It's crazy!

Then we hit the coast for a last little 10 kilometers before the final climb up the Poggio and by this point the race is strung out. Last year I remember there were about 10 of us at the front trying to keep the race strung out, but we got caught by a group of 80 just before the Poggio.

On a normal training ride the Cipressa is actually a little harder than the Poggio and really neither climb in training is that hard, but when you hit them after 170 to 190 miles of all-out racing, well, they get really hard.

Personally I love doing this race, but it is really hard and stressful. I've been the top ten here, but honestly my biggest goals are coming up in a couple of weeks with the Tour of Flanders and Paris-Roubaix. But getting this kind of race is crucial to getting my legs ready for those races.

That said, this year I have to say my legs feel better than usual at this point in the year, so if an opportunity presents itself I will definitely go for it.

For Team Colombia there are three protected riders, Mark Cavendish, Thomas Lovkvist and myself. Thomas and I can play our cards before the sprint but if Mark is there in the sprint, we will all work for him. Mark is making his debut in this race, but after the past season he had, there is no telling what he can do. Thomas, however, is also going really well. He made a great move on the Cipressa last year and two weeks ago won Eroica, which is like a little Paris-Roubaix.

In terms of our competition I think you really have to look at the sprinters this year, such as Daniele Bennati, Tom Boonen, Heinrich Haussler, Alessandro Petacchi and Thor Hushovd.

Personally I think it will come down to a sprint. There are so many of these sprinters who are really focused on this race and who are riding well right now. So I think that even if there are only 20 to 30 guys at the finish, a couple of them will be sprinters ... but we'll see.
Posted by Recovox at 1:06 AM